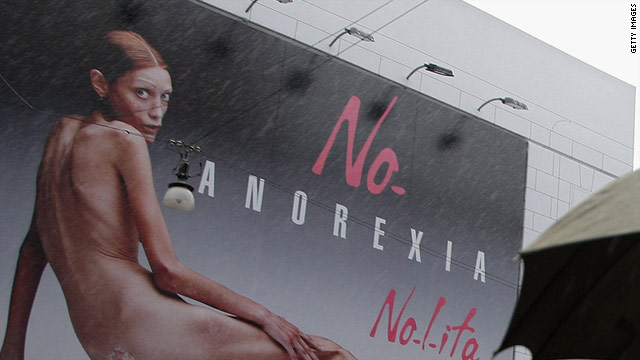 Paris (CNN) -- A former fashion model who posed in a provocative ad campaigning against anorexia has died in France, her acting teacher said.

Isabelle Caro, who was widely reported to be 28 years old, gained attention when she posed nude for the 2007 ad, which was featured on a billboard. The huge photo shows her gaunt body, with her back to the camera and her ribs visible, above the words "No Anorexia."

News of her death was reported in European news outlets on Wednesday and Thursday, but Caro died last month, her acting teacher, Daniele Gouzard-Dubreuil Prevot, said. She said she did not know how Caro died and said Caro's father told her that Caro died on November 17 and was buried on November 24.

Vincent Bigler, a Swiss singer, said he received an e-mail from Caro in September.

"Isabelle told me she had been hospitalized for 15 days with acute respiratory disease," he said.

He has not spoken with Caro's family and said he learned of her death through Facebook and from mutual friends.

In 2008, Caro released an autobiography called "The Little Girl Who Did Not Want to Get Fat." In it, she described the debut of her disease when she was 12, and talked about her battle against death, according to a summary of the book on the publisher's website. She also denounced the "Pro-Ana" movement, whose supporters claim that anorexia is not a disease but a choice and a lifestyle.

On what appears to be Caro's Facebook page, listed under "Philosophy" are the words "the best is yet to come."

In the introduction of her blog, which she called "Anorexia or the hunger to live, take a step toward healing," Caro appeared to describe herself as "a little invisible snowflake in a strong blizzard who is fighting, fighting to finally live, despite years of suffering, and who is crying out to the entire world to say that anorexia is a hell from which you must escape while you still have time."