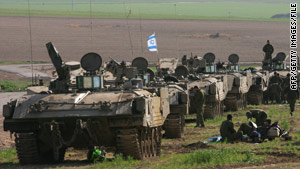 Jerusalem (CNN) -- As a deadline neared, Israel handed the United Nations Friday a report justifying its actions during last year's Gaza campaign and rebutting the so-called "Goldstone Report" as biased.

At a tree-planting ceremony southern Israel Friday, Israeli Defense Minister Ehud Barak said, "This report stresses that the IDF (Israel Defense Forces) is like no other army, both from a moral standpoint as well as from a professional standpoint.

"The Goldstone Report is a distorted, false, and irresponsible report," Barak said. "All of the soldiers and officers whom we sent to battle need to know that the state of Israel stands behind them even on the day after."

"The Gaza Operation Investigations: An Update" -- a follow-up of a July paper on the Gaza mission -- is in response to the United Nations' call for both the Jewish state and the Palestinian Hamas movement to conduct independent inquiries to examine charges that both sides committed war crimes during the course of the Gaza war fought just over a year ago.

Israel's 46-page response outlines the steps the nation has taken to investigate charges of wrongdoing by its military during the course of its three-week offensive -- dubbed Operation Cast Lead -- in Gaza aimed at stopping militant rocket fire into Israel.

Israel says it faced "asymmetric conflicts" and blamed "militants operating from within and behind civilian areas" for placing civilians at risk.

The Israeli military has "launched investigations into 150 separate incidents, including 36 criminal investigations opened thus far," according to the report.

"Israel is committed to ensuring that every such incident is fully and fairly investigated, to ensure that lessons can be learned and that, if justified, criminal or disciplinary proceedings initiated," the report stated. "To this end the IDF policy requires that every allegation of wrongdoing be investigated, irrespective of its source."

The report does not mention whether Israel will conduct an independent, non-military investigation of the charges of war crimes and possible crimes against humanity leveled in the Goldstone Report.

Released in September, the 575-page report written by a commission chaired by South African Judge Richard Goldstone alleged that both Hamas and Israel committed war crimes and may have also committed crimes against humanity during the course of fighting that killed some 1,400 Palestinians and 13 Israelis.

The majority of criticism in the report was reserved for Israel which has waged an aggressive international public relations campaign to discredit the probe's findings.

With the publication of the report, the United Nations asked both Israel and Hamas to initiate independent investigations into the the various allegations and report back before February 5 when the General Assembly will be taking up the report and its recommendations.

Among those recommendations were the call for the report's findings to be passed on to the International Criminal Court if both sides did not start legitimate investigations into war crimes.

In Israel, the military has conducted investigations into possible wrong-doing itself which has raised criticism from human rights groups and some Israeli lawmakers that a more credible investigation is needed.

Israel's outgoing attorney-general Menachem Mazuz told the Haaretz newspaper Friday "Israel has a clear interest in conducting a serious, expert examination that will deal with the (Goldstone) report and produce an opposing report."

In Gaza, the ruling Hamas movement this week released a 20-page summary of the steps it has taken to investigate wrong-doing, contending it had prevented militants from rocketing Israeli civilians and that any examples to the contrary were a result of mistaken fire.

It was a claim quickly dismissed by the by human rights organizations and the Israeli government.

"Hamas can spin the story and deny the evidence, but hundreds of rockets rained down on civilian areas in Israel where no military installations were located," Joe Stork, deputy Middle East director at Human Rights Watch said in a statement. "Hamas leaders at the time indicated they were intending to harm civilians."