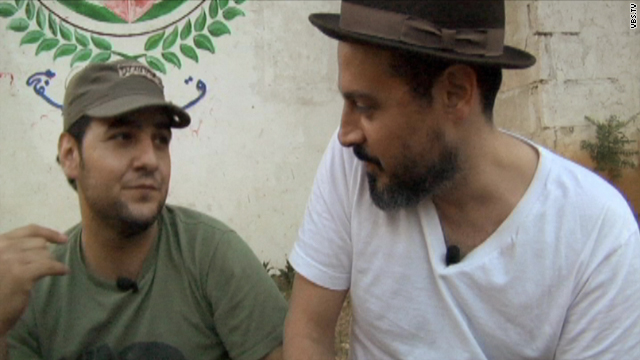 Editor's note: The staff at CNN.com has recently been intrigued by the journalism of VICE, an independent media company and website based in Brooklyn, New York. VBS.TV is VICE's broadband television network. The reports, which are produced solely by VICE, reflect a very transparent approach to journalism, where viewers are taken along on every step of the reporting process. We believe this unique reporting approach is worthy of sharing with our CNN.com readers.

Brooklyn, New York (VBS.TV) -- Ahmad Iskander is a Palestinian Boy Scout leader who lives in Bourj al Barajneh, one of the biggest and most well-known Palestinian refugee camps in Lebanon.

It is in southern Beirut and is home to about 100,000 permanently displaced Palestinians. Life is and has been difficult for Ahmad, his family and his community. Food, water and electricity are consistently scarce, and the basics of life are always a challenge.

In the eyes of the government, people living in the camps are homeless. They hold no official Lebanese citizenship, and there is no Palestinian state for them to belong to either. Without a homeland, they're stuck, and they have been subject to political upheavals of Lebanese and regional life.

Knowing that the city (the Southern part, especially) lived through a major war with Israel, it's hard to imagine surviving in this environment, unable to find employment or secure your living situation.

However, Ahmad doesn't care about the necessities of life or the realities of war. Despite these daily obstacles, he wants to be able to make a film depicting life in the camps, telling stories about the people and the often desperate way of life. Ahmad wants the opportunity to show the camps from an insider's perspective, to strip away the misunderstandings and false representation that some international media agencies have projected onto his community over the past years.

See the rest of Vice guide to Palestinian filmmaking at VBS.TV

In summer 2007, VICE gave Ahmad a camera so he could pursue his dream of making a film. Naturally, people living in situations like Ahmad's are unable to tell their stories in such a way. The cost of producing a film is far too high for a person living in a refugee camp. Ahmad wanted a chance to give his fellow refugees a voice, and we wanted to help make this possible.

We had a few questions for Ahmad: How do you make a film in a refugee camp? How do you find actors? What's the story about? Do the locals understand what is going on? What are "Palestinian" films like? What is the history and tradition of filmmaking in these camps?

We also wanted to know who was making PLO and Hezbollah films. And who is making the Palestinian martyr films, the ones where kids are being blown up in the process of blowing up Israelis. In this episode of Vice Guide to Film, VICE's Shane Smith and Eddy Moretti go to Bourj to visit Ahmad as he makes his film.

We see what he has accomplished: going to filmmaking workshops and meeting with other Palestinian directors, seeing their stories and how this genre has developed out of one of the worst possible circumstances in the world.