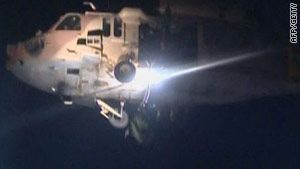 An Israeli helicopter hovers above one of the aid ships as commandos storm the boat.

(CNN) -- Three Israeli choppers with 15 soldiers aboard and several commando boats were involved in a skirmish with activists on a flotilla seeking to defy an Israeli blockade and deliver aid to Gaza, a senior military official said Monday on condition of anonymity.

Nine people were killed in the resulting violence early Monday as Israeli troops attempted to stop the flotilla.

An Israeli commando said upon descending into a boat with ropes, he was immediately attacked by a group of people.

"They beat us up with metal sticks and knives," he said. "There was live fire at some point against us... They were shooting at us from below deck."

Some of the soldiers were tossed from the top deck to a lower deck by the activists, and jumped in the water to save themselves, he said.

Activists grabbed soldiers and tried to hold them hostage, stripping them of their helmets and equipment, he said. About 30 activists, all speaking Arabic, carried out the attack, he said.

Activists have said the Israeli soldiers opened fire on unarmed civilians. Neither account could be independently verified by CNN.