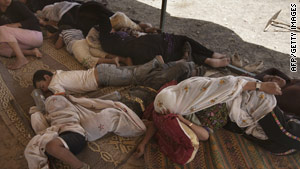 Bedouin women and children sleep in the shade after being escorted from their village.
STORY HIGHLIGHTS

Jerusalem (CNN) -- Police evicted 200 Bedouins from their homes in a southern Israeli village on Tuesday and demolished their dwellings, an act decried by residents who said they are on ancestral land.

The move occurred five miles north of Beer Sheva in a village called Al-Araqeeb, an enclave not recognized by the state of Israel.

Witnesses told CNN that the Israeli forces arrived at the village accompanied by busloads of civilians who cheered as the dwellings were demolished. They said armed police deployed with tear gas, water cannon, two helicopters and bulldozers.

But Israeli police spokesman Micky Rosenfeld said there were no disturbances and the operation went according to plan.

He said the move was in response to a court order and people had been settling there illegally. Rosenfeld said there were about 30 shacks and 200 people removed.

Villagers said they've lived in the region for years back to the Ottoman days before Israel was founded, and have original deeds to the land.

After the Israeli forces left the scene, some villagers immediately started rebuilding their dwellings.

"The state of Israel is treating us like cockroaches," said Sulaiman Abu Mdian, 29, a father of four who works as a chicken farmer.

Bedouins are Arabs who live in the desert regions of the Middle East. Some are nomadic and others are sedentary and remain in one location.