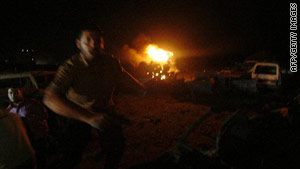 Gaza City (CNN) -- Israel launched a series of airstrikes in Gaza starting late Friday in response to a rocket assault on Ashkelon earlier in the day.

The Israel Defense Forces said the strikes targeted three locations in Gaza: a Hamas "terror-activity site" in the north, a weapons manufacturing site in central Gaza and a weapons smuggling tunnel in Rafah.

The first strike around 11:30 p.m. (4:30 p.m. ET) hit a runway near the compound of the late Palestinian leader Yasser Arafat, which is now occupied by Hamas, according to a CNN stringer at the scene. Hamas security forces reported eight people wounded from the strike.

The coastal Israeli city of Ashkelon was hit by a rocket fired by Palestinian militants in Gaza early Friday, causing minor damage but no injuries, the Israel Defense Forces spokeswoman said.

Ashkelon, with a population of approximately 125,000 residents, is located about 6 miles (10 kilometers) from the Israel-Gaza border and has been the target of many rockets originating from Gaza -- some wounding residents.