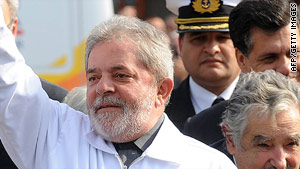 President Luiz Ignacio Lula da Silva was quoted by Brazil's official state news agency EBC as saying "I want to make an appeal to my friend Ahmadinejad ... and to the government of Iran to allow Brazil to take in the woman."

In May, Brazil helped broker a deal with Iran that would provide Tehran with enriched uranium for medical research.

Sakineh Mohammadi Ashtiani was convicted of adultery in 2006 and was originally sentenced to death by stoning. Iranian authorities say the sentence has been put on hold, but there have been no reports as to whether a new sentence has been imposed.

The 43-year-old mother of two is reportedly still being held held in Tabriz prison.

Iran's judiciary could reinstate her sentence of death by stoning, execute her by another means, or possibly even grant her a reprieve, according to human rights groups.

Ashtiani's attorney, Mohammad Mostafaei, told CNN earlier this month that his client confessed to the crime after being subjected to 99 lashes. He said she later recanted the confession and denied any wrongdoing.

A letter believed to be written by Mostafaei was posted on the Internet on Saturday, calling for the release of his relatives. The lawyer says he has cooperated with interrogators, and says his wife and brother-in-law are victims of of "hostage taking."

Mostafaei said he and his family are innocent of any wrongdoing.

The Guardian newspaper previously reported that Mostafaei's wife was arrested when they were unable to find him.