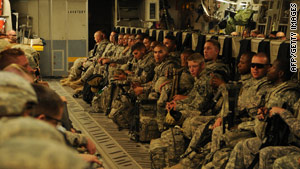 That puts U.S. Forces-Iraq on track to draw down to 50,000 troops by September 1, when Operation New Dawn is to begin and forces are to switch to an advise-and-assist role.

The Pentagon on Wednesday had estimated the number of U.S. forces in Iraq at 56,000, which reflected the last calculation conducted August 17, the military said in a news release.

The 4,000-member 4th Stryker Brigade Combat Team departed to Kuwait on Wednesday and Thursday. The brigade's departure comes more than seven years after U.S. combat forces entered Iraq, though it does not signify the end of all U.S. combat forces in the country.

But there is plenty of work left to do, former U.S. Ambassador Ryan Crocker said Wednesday.

Video: As the troops come home

"Iraq is still at the beginning of the story of its evolution since 2003," he said, referring to the date of the U.S.-led invasion of the country.

In fact, Iraq has been without a functioning government for more than five months, electricity and other utilities are available only sporadically in the capital, and violence appears to be increasing. At least 48 people were killed Tuesday in an attack outside a military recruiting center in Baghdad.

"We're going to have to leave a large footprint behind, and this is not going away for us as an issue," Crocker said.

The State Department is preparing to make up much of that footprint. It will handle many of the responsibilities currently shouldered by the military, increasing its security contractors from 2,700 to nearly 7,000, sources said. They are expected to work with diplomats and police trainers in some facilities.

The State Department has asked for an additional $400 million to cover the costs, though it was not clear it would get it.

The State Department has asked the U.S. military to leave behind surveillance systems, about 50 bomb-resistant vehicles and a few dozen UH-60 helicopters, a military official said. Although the department got a lot of what it wanted, the Pentagon said it could not give them all the helicopters because they are needed in Afghanistan, the official said.

CNN's Jomana Karadsheh and Adam Levine contributed to this story.