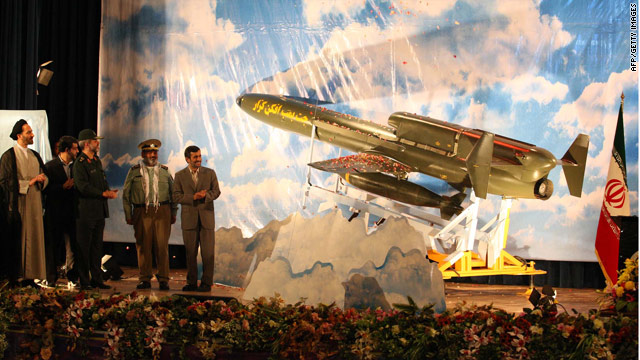 The unmanned aerial vehicle is capable of carrying out bombing missions against ground targets and flying long distances at a high speed, Press TV said.

In February, Iran inaugurated the production line for two types of drones with bombing and reconnaissance capabilities, the semiofficial Fars news agency reported.

Iran has manufactured its own tanks, armored personnel carriers, missiles and fighter planes since 1992, according to Press TV.

At the time, most major state-run media outlets in Iran did not carry news of any incident involving an Iranian drone and Iraq's national security adviser declined to comment.

Unmanned vehicles have become a staple of modern combat.

Ahead of the drone's unveiling, Iran's defense minister said the country's military planned to reveal a project of "great importance" on Sunday, according to state-run Press TV.

"Iran's defense capability has reached a point which does not need any aid from other countries," Defense Minister Brig. Gen. Ahmad Vahidi said, according to the semiofficial Iranian Students News Agency.

It is not clear whether the unveiling of the long-range drone was the announcement he was referring to.

But some Western nations have questioned whether the nuclear fuel will be used solely for electricity, suggesting that Iran would eventually try to enrich uranium on its own, providing material for nuclear weapons.

The United States has questioned Iran's motives in continuing to enrich uranium within its borders.

"Russia is providing the fuel, and taking the fuel back out," White House spokesman Robert Gibbs said earlier this month.

Iran has maintained all along that the site will produce energy, but the United States and some other international observers remain unconvinced.

Russian Foreign Minister Sergey Lavrov, speaking to Russian reporters in the Black Sea resort of Sochi on Wednesday, brushed off Western concerns about the Bushehr facility, calling it "the most important anchor holding Iran to the nonproliferation regime," according to the Russian news agency RIA-Novosti.