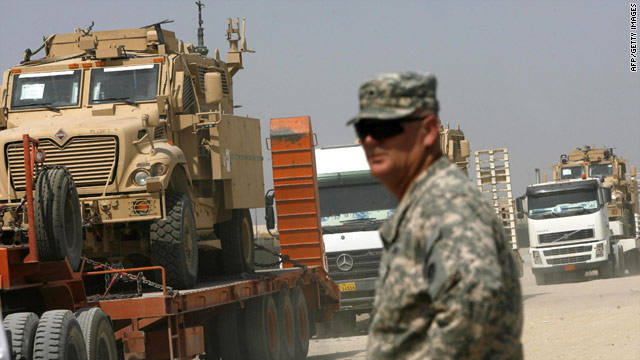 A U.S. soldier watches as military vehicles that had been in Iraq are moved to an undisclosed base in Kuwait.
STORY HIGHLIGHTS

The drop comes ahead of President Barack Obama's deadline to bring down troop levels by August 31.

The military said U.S. troops will now transition to Operation New Dawn, effective September 1. In this phase, the United States will help train Iraqi security forces until the end of its mission in December 2011.

While the total number of U.S. troops in Iraq will continue to diminish throughout 2011, the withdrawal rate will be "calibrated and adjusted based on conditions on the ground," according to presidential national security adviser John Brennan.

On Monday, Vice President Joe Biden said that the overall level of violence in Iraq has now declined to the point that some early U.S. veterans of the conflict "would not recognize" the country today.

Video: Can Iraq's military hold it together?

The roughly 650,000-member Iraq security force is "already leading the way to defend and protect [the] country," he said.

"Some said that our drawdown would bring about more violence. Well, they were wrong," Biden said at a gathering of the Veterans of Foreign Wars in Indianapolis, Indiana.

Iraqi officials, however, have noted a recent campaign of bombings and shootings in Baghdad, where gunmen have attacked traffic police and checkpoints, killing Iraqi troops.

Many Iraqis have blamed the recent violence on the current political paralysis, in which quarreling parties have failed to form a government nearly six months after parliamentary elections.

The Iraqi government had been pushing to increase security ahead of the U.S. drawdown.

Biden stressed that the changing U.S. role in Iraq should be not be viewed as American disengagement. He noted that the administration is largely following former President George W. Bush's plan for a "long-term" relationship with Baghdad.

Civilian efforts to promote Iraqi stability are ramping up, Biden said. But Obama is planning a speech on the situation in Iraq after he returns to Washington from vacation on August 29, a senior administration source said Sunday.