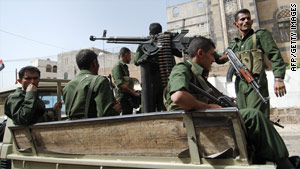 Anti-terrorism operations, including air strikes, in Yemen have been mostly handled by the U.S. military.

A counterterrorism official told CNN that the administration recognizes that "not enough is being done in Yemen" to meet the growing challenge posed by al Qaeda in the Arabian Peninsula (AQAP). "We need to scale up efforts to disrupt the group," added the official, who spoke about sensitive issues on the condition of anonymity.

According to the official, all options to fight AQAP are under review at the White House. Conditions in the Middle Eastern nation have allowed al Qaeda to regroup there, said the official, "They've shown already that they can attack in Yemen and in the United States," the official said.

"They're not feeling the same kind of heat -- not yet, anyway -- as their friends in the tribal areas," the official said, referring to Pakistan.

"Everyone involved on our side understands that needs to change."

The Washington Post reported Wednesday that CIA analysts concluded al Qaeda's offshoot in Yemen has become a more urgent threat to the U.S. than the core group in Pakistan.

The CIA would not comment on the Post report, but spokesman George Little told CNN: "This agency and our government as a whole work against al Qaeda and ts violent allies, wherever they appear."

Al Qaeda in Pakistan remains a lethal enemy, said the counterterrorism official who spoke with CNN, and there would be no easing on that front or in the pursuit of terror mastermind Osama bin Laden and the rest of al Qaeda's leadership.

But with the help of allies, the United States has been able to score "lots of successes" against al Qaeda in Pakistan, the official said. That includes the success of U.S. unmanned predator strikes in Pakistani regions along the border with Afghanistan.

Since the Obama Administration took office 19 months ago, missile attacks on suspected terrorists in Pakistan have increased dramatically.

The United States has "cut into their ability to plot, plan and train, but they remain very dangerous and they are still the hub to all spokes, the heart of al Qaeda," the official said.

"No one's even close to saying it's over in Pakistan. Not at all. In fact, we not only have to keep up the pressure there, we have to spread it to al Qaeda's nodes and affiliates elsewhere."

The Yemeni government has been fighting a growing AQAP with the help of the U.S. military and intelligence assets.

The counterterrorism official said the larger role for the CIA will not limit the military's efforts. "There is enough work to go around," said the official.

Defense Department official said both agencies remain involved in the Yemen campaign but added that the intelligence community can operate differently, a reference to the fact the U.S. military cannot take action without the approval of the host government.

Al Qaeda in Yemen grabbed the attention of the West with the Christmas Day attempted bombing of a Northwest Airlines trans-Atlantic flight as it landed in Detroit, Michigan.

The suspect, Umar Farouk AbdulMutallab, who has pleaded not guilty to six federal terrorism charges, was reportedly trained and armed in Yemen.

Since its inception in January 2009, AQAP has claimed responsibility for numerous terrorist attacks against Saudi, Korean, Yemeni and U.S. targets.

CNN's Pam Benson and Barbara Starr contributed to this report.