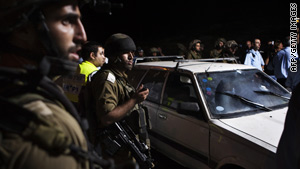 Israeli soldiers inspect a settlers' car after it was ambushed by Palestinian gunmen in the southern West Bank Tuesday.
STORY HIGHLIGHTS
RELATED TOPICS

Jerusalem (CNN) -- Four Israelis -- including a pregnant woman -- were killed Tuesday near Hebron in the West Bank in a shooting for which the militant wing of Hamas claimed responsibility, officials said.

The incident occurred near Bani Naim junction, the largely Palestinian territory where Jews have settled in places like Hebron, Israel Defense Forces spokeswoman Lt. Col. Avital Leibowitz said. The victims were in a car on Route 60, the IDF website said.

Guy Gonen, a paramedic who was one of the first people on the scene, said the car was sprayed with bullets.

More than a dozen bullet holes were found in the left side of the white Subaru station wagon in which they were driving.

The attack comes ahead of direct talks scheduled to begin Thursday in Washington between Israeli and Palestinian leaders -- the first such talks since 2008.

Izzedin Al-Qassam Brigades -- the military wing of Hamas -- claimed "complete" responsibility for the attack, according to a statement on its website.

Abu Obeida, a spokesman for the group, confirmed responsibility for the attack in an interview with the Hamas radio station.

Sami Abu Zuhri, a Hamas spokesman in Gaza, congratulated the attackers, saying the attack was a normal reaction to what he called "the crime of occupation." Hamas, which controls Gaza, opposes direct talks and the continued existence of Israel.

The four killed -- two men and two women -- were from the settlement of Beit Hagai.

IDF forces were searching for the attackers, the IDF website said.

"This is a serious incident," Israeli Defense Minister Ehud Barak said in a written statement. "The IDF and the security forces will do all that is needed to catch these murderers. Israel will not allow any terror element to raise its head and it will collect the price from these murderers and those who sent them. This is an apparent attempt by base terrorists to harm the efforts to move the peace process and to harm the efforts of the talks that are due to begin in Washington."

The IDF spokeswoman said in a phone briefing Tuesday that the army sees this attack as "very severe," and noted that the security situation in that area had been better in the past 24 months.

"For the last two and a half years there has been a long list of easing of measures. The security situation in the area was very stable in the last two years," Leibowitz said.

The incident is a blow to the efforts of Palestinian leaders to prove that they are doing what Israel has most demanded of them -- preventing attacks and providing tough security.

In addition, some settlers were cutting Palestinian olive trees near Burin village south of Nablus, he said.

In Washington, Secretary of State Hillary Clinton condemned the attack after meeting with Israeli Prime Minister Benjamin Netanyahu. "This kind of savage brutality has no place in any country under any circumstances," she told reporters. "The forces of terror and destruction cannot be allowed to continue. It was one of the reasons why the prime minister is here today, to engage in direct negotiations with those Palestinians who themselves have rejected a path of violence in favor of a path of peace. We have to not only stand against the kind of horrific murders we saw today."

Netanyahu called the killings "a savage murder" and vowed to punish the killers. "We will not let terror decide where Israelis live or the configuration of our final borders. These and other issues will be determined in the negotiations for peace we are conducting. And in these negotiations, I will set clearly the security needs that are required precisely to address this kind of terror."

The U.N. special coordinator for the Middle East peace process, Robert Serry, issued a statement saying he "is shocked" by the report. "We condemn this murderous act and call for those responsible to be brought to justice." He called on all parties "not to allow the enemies of peace to affect the negotiations about to be launched, and to progress with determination and courage on behalf of both peoples, towards a final settlement."