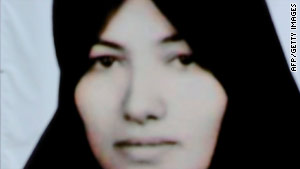 Sakineh Mohammadi Ashtiani was sentenced to death by stoning after she was convicted of adultery.
STORY HIGHLIGHTS

Tehran, Iran (CNN) -- The son of an Iranian woman sentenced to death by stoning said he wants proof that his mother's adultery and murder case has been put "on hold."

"We have so far not received an official and legal document on stopping the stoning sentence and execution, we therefore do not accept these claims," Sajjad Ghaderzadeh said in a statement Wednesday. "They must issue us legal documents in this regard."

While Mehmanparast's statement did not differ greatly from previous, sometimes contradictory reports from the Iranian government about the fate of the woman, Sakineh Mohammadi Ashtiani, it did indicate continued attention to the murder aspect of her case.

"The sentencing of Ms. Ashtiani for adultery has been stopped and (her case) is being reviewed again, and her sentencing for complicity in murder is in process," Mehmanparast said.

"I ... do not assume that the case is resolved. We do not have any official document," Ghaderzadeh said. "If the Islamic Republic is sincere, it should produce evidence."

"We, Sakineh Mohammadi Ashtiani's children, declare that our mother is innocent and should be freed by the Islamic Republic immediately and without any conditions," Ghaderzadeh said.

There have been conflicting reports about the murder charge, which relates to the death of Ashtiani's husband. Ashtiani's previous lawyer, Mohammad Mostafaei, said last month his client had been sentenced to death for the crime but that the sentence was commuted because the victim's family forgave her.

Ashtiani, however, told the British newspaper The Guardian last month that she was acquitted of the murder in 2006. Ashtiani, who spoke to the newspaper through an intermediary, said the man who actually killed her husband was identified and imprisoned for the crime.

Mehmanparast said those concerned about Ashtiani's condition should have some consideration for the family of the victim, according to Press TV.

"Defending a person on trial for murder should not be turned into a human rights matter," Mehmanparast said.

Ashtiani gave an interview to state-run TV last month in which she said she knew about a plot to kill her husband but that she had not taken it seriously at the time.

"The man entered my life and fooled me with his words and said let's kill my husband," she said in the interview, which was criticized by human rights groups. "He fooled me and said I'll do this for you, what a bad husband, I'll take care of you. He was my husband's cousin, and he said things about my husband.

"Then I realized, when I went to prison, he had a criminal record and that this was his third criminal record, and when he said we should kill my husband, I couldn't even believe him or that my husband would die, I thought he was joking, that he had lost his mind.

The prosecutor of East Azerbaijan Province, Malek Ajdar Sharifi, said on the same program that "the deceased was given an injection to fall asleep by his wife, then the man arrived and put him into the bath and put two electrical lines on his body and killed the deceased."

The human rights group Amnesty International criticized the interview, saying Ashtiani may have been coerced.