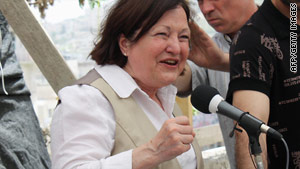 Jerusalem (CNN) -- An Irish Nobel Peace Prize laureate was refused entry into Israel on Tuesday because of her participation in an aid flotilla to Gaza in June, a spokesman for the Israeli Foreign Ministry said.

Mairead Maguire was detained at Ben Gurion Airport as she arrived with a delegation of other high-level women's rights activists from around the world.

"Mairead was refused to enter Israel this morning and was supposed to be deported this afternoon," said Fatmeh El-Ajou, an attorney with Adalah, the legal center for Arab Minority Rights in Israel, which is representing Maguire. "She was told the reason to refuse her entry was her participation in the flotilla to Gaza in June."

Maguire, along with fellow Nobel Peace Laureate Jody Williams and founders of the Nobel Women's Initiative, was set to lead a delegation to Israel and the Palestinian territory over the next seven days. The delegation planned to travel to Jerusalem, Haifa, Nazareth, Ramallah, Hebron and Bil'in to learn from and highlight the work of female peace builders.

"She had been on two or three flotillas to Gaza and, as is the case with participants in flotillas, she had been deported with all the other participants, and the law is that once you are deported you are denied an entry visa," Palmor said.

Maguire was on the MV Rachel Corrie, an Irish cargo ship that set sail for Gaza in early June loaded with humanitarian supplies in spite of an Israeli naval blockade. It was seized by the Israeli navy before it reached Palestinian-controlled Gaza, and its passengers were deported. The Rachel Corrie's mission came just five days after Israeli commandos raided a similar flotilla in an incident that left nine passengers aboard the Mavi Marmara dead.

But Maguire's attorney challenged Palmor's statements, saying no charges were filed against her when she was last deported in June.

El-Ajou said that Israeli authorities told Maguire at the time that the Rachel Corrie incident would "not prevent her from coming back to Israel."

"What the Israeli authorities told her today is that she won't be allowed to enter Israel for 10 years from now," El-Ajou said.

Asked about the status of Maguire, El-Ajou said, "She is in a good situation. She is a peaceful, brilliant, interesting person, and she is very keen on challenging the decision."

El-Ajou was working to get a judicial order to prevent Maguire's deportation, she said.

"(Maguire) believes that there is no reason for preventing her entry to Israel due to the fact that all her activities are peaceful and non-violent and are human-rights oriented," El-Ajou said.

Rachel Vincent, a spokeswoman for the Nobel Women's Initiative, said the rest of the delegation will continue on with the planned trip at Maguire's request.