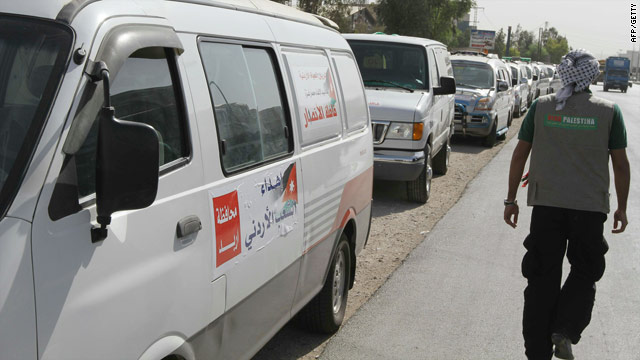 Vehicles in Damascus on October 4, 2010, wait to join other aid convoys making their way to the Syrian port of Lattakia.
STORY HIGHLIGHTS
RELATED TOPICS

Jerusalem (CNN) -- A Gaza humanitarian convoy that includes passengers who survived a previous fatal flotilla incident has been further delayed in its attempt to deliver aid for Palestinians, organizers said Monday.

The Viva Palestina convoy, hailed by organizers as the largest convoy to break the Gaza embargo, has already traveled nearly 5,000 kilometers (3,000 miles) by road from England. It is waiting to depart from the Syrian port of Latakia to Al-Arish, Egypt.

Originally slated to depart on Sunday, the convoy was delayed by last-minute complications over entry requirements by Egyptian authorities, organizers said. The convoy had hoped to sail Monday.

"To everyone's intense frustration there has been a further delay in the departure of the convoy to Gaza," said a press statement from organizers. "Convoy negotiators are in intensive discussions to try to resolve formalities which are still holding things up."

The Viva Palestina convoy has been joined by ships from Morocco, Algeria, Jordan and Persian Gulf nations. Two of the ships are slated to pass through the point at which Israeli troops boarded the Mavi Marmara in May.

Israeli troops used force on the activists in that incident, leaving eight Turks and one U.S.-Turkish dual citizen dead. Israel says its troops were attacked by those on board, but passengers on the boat insisted they were fired on without provocation.

Among those on board the Viva Palestina convoy are 40 of the passengers who were on the Mavi Marmara. Viva Palestina organizers have planned a commemoration service at that location and will lay flowers on the water.

The main ship in the Viva Palestina convoy, carrying 380 activists from 42 countries, 147 vehicles and $5 million in medical aid, has been docked at the Syrian port for the last 12 days. It was given the green light to sail to Egypt after lengthy mediation with Egyptian and Syrian authorities.

The aid will not go to Gaza by sea. It is due to arrive Monday at the Egyptian port, from where it will be transferred into the Palestinian territory by land through the Rafah crossing.

"We are anxious to get to Gaza as soon as possible to deliver the goods and to show the people of Gaza that we have not abandoned them," said aid convoy leader Kevin Ovenden.

Israel announced in June that it would loosen its embargo on impoverished Gaza, allowing more civilian goods and construction materials to flow in while still banning military equipment and weapons.

Gaza is ruled by Hamas, the Palestinian Islamic movement that is considered a terrorist organization by the United States, Israel and the European Union.