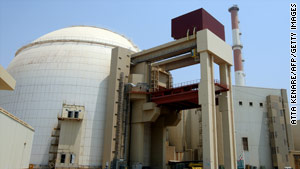 (CNN) -- The United States has no problem with Iran's nuclear energy plant in the southern city of Bushehr, but it is concerned about work that may be happening at other facilities, Secretary of State Hillary Clinton said Tuesday.

Her comments came the same day Iran was reported to have begun loading fuel into the core of its first nuclear reactor, according to state media.

"Our problem is not with their reactor at Bushehr. Our problem is with their facilities at places like Natanz and their secret facility at Qom and other places where we believe they are conducting their weapons program," Clinton told reporters at a meeting with Austria's foreign minister, according to remarks provided by the U.S. State Department.

"Iran is entitled to the peaceful use of civilian nuclear power. They are not entitled to a nuclear weapons program," she added.

The United States and other world powers fear Iran is developing a nuclear program for military purposes. Iran has denied those allegations and says the Bushehr plant will be used to generate electricity.

"The Bushehr nuclear power plant is one of the major projects of Iran which will help produce alternative forms of energy," he said.

Tehran says the electricity produced by the plant will add to the national power supply.

Over the next two months, 163 fuel rods will be injected into the fuel reactor before it becomes fully operational.

"Today we witnessed a milestone in the launch process of this plant," Salehi said on state-run TV. "We have succeeded under the heaviest pressures."

Boroujerdi added: "Americans have mobilized all their resources around the world to ratchet up the pressure on Iran."

In a news conference with reporters later Tuesday morning, Salehi gave reassurances on the safety of the Bushehr plant, and Mehmanparast reasserted Iran's "inalienable rights to peaceful use of nuclear technology."

"We will continue our long-term programs in that regard," Mehmanparast added.

The plant is expected to produce 1,000 megawatts of electricity once all the fuel rods in place in the core of the reactor. Officials estimate the reactor could become fully operational and produce energy as early as 2011.

The construction of the Bushehr plant, on the coast of the Persian Gulf. started in 1975 when Germany signed a contract with Iran. Germany, however, pulled out of the project after the 1979 Islamic Revolution.

Iran then signed a deal with Russia in 1995, under which the plant was scheduled to be completed in 1999, but the project was repeatedly delayed.

The fuel for the plant has been provided by Russia. Under an earlier agreement, Iran is set to send the spent fuel rods to Russia.