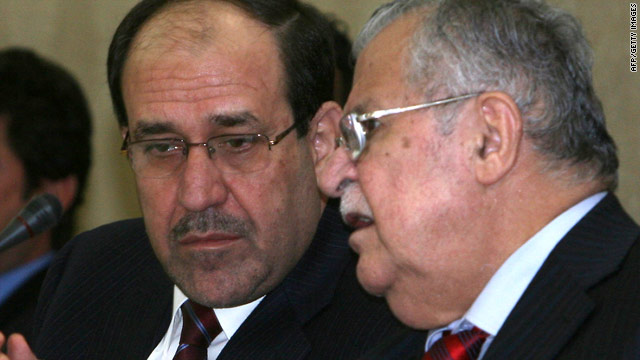 Baghdad, Iraq (CNN) -- Iraq's top political leaders met in the country's Kurdish north on Monday as part of intensified talks between the groups to try and break the more than eight-months' deadlock to form a government.

Described by some of the leaders as "historic," the meeting is the first such public gathering of the politicians including the two main rivals -- Prime Minister Nuri al-Maliki and former Prime Minister Ayad Allawi -- since the March 7 elections.

The opening addresses of the three-day talks in Irbil -- called for and hosted by the Kurdish Regional Government's President Massoud Barzani -- were broadcast live on state TV and other Iraqi channels.

Last month, Barzani put forward an initiative for the various blocs to hold round-table talks aimed at speeding up the formation of a new government.

Over the past week, representatives of the blocs have been meeting daily to try and reach a power-sharing agreement.

In the March election, al-Maliki won 89 seats but lost to former Prime Minister Allawi's bloc, which received 91 seats. A 163-seat majority out of 325 seats is needed to form a government. The two leaders since have been jockeying for power.

Leading up to Monday's meeting, officials had said they were close to completing an agreement, but remarks made by a number of the leaders indicated that they have yet to address key sticking points that remain unresolved ahead of this week's parliament session.

Sunni Vice President Tariq al-Hashimi, a leading member of Allawi's bloc who described the situation in the country as a "crisis," was critical of the meetings preceding Monday's talks. He said officials had not tackled any of the contentious issues and left them all to the leaders to resolve in a few days ahead of a parliament session on Thursday.

Allawi said the talks have reached some but not all the results envisioned.

Echoing what his cross-sectarian al-Iraqiyya bloc has said since it got its two-seat lead over Maliki's coalition, Allawi said the government must be a real national partnership one where no one has "the upper hand" over the others. His bloc garnered most of the Sunni Arab vote.

Allawi's al-Iraqiyya and other smaller blocs have been opposed to second term for al-Maliki.

In recent days, al-Maliki who last month joined forces with followers of anti-American cleric Muqtada al-Sadr to form a post-election coalition, has also received the backing of one of the smaller Sunni Arab groups. There are public hints that the Kurdish coalition with more than 50 seats in parliament might be endorsing him for a second term.

Officials and many observers have warned against a government that would exclude al-Iraqiyya and disenfranchise the Sunnis, whose exclusion from the government in the past led many to take up arms.

A recent spate of violence across the country, including some of the most high-profile attacks to strike the capital since the start of the war in 2003, has been blamed by many on the political situation and the protracted government formation process.

Ammar al-Hakim, the leader of one of Iraq's top Shiite political parties, said such a meeting should have taken place months ago.

Al-Hakim, who said there should be no losers in this process, criticized the delay in government formation, saying that entering the ninth month since elections is a "shortcoming" and a "setback" for the political process.

Most of the leaders spoke about the importance of an all-inclusive government and the importance of reaching real national reconciliation, but they also admitted that there is not enough time for them to resolve all such issues.

The meetings -- expected to continue in the Kurdish region behind closed doors on Monday and resume in Baghdad on Tuesday -- will deal with more than a dozen issues.

Some of the issues included the main hurdles for government formation like agreeing on the allocation of the top posts like president, prime minister and parliament speaker and the distribution of powers.

But they also included issues that the politicians have not been able to resolve for years, and al-Maliki said it could take years to reach solutions on them. So, the issues might be narrowed to the ones critical for government formation.

Violence has been steadily rising since the election, most Iraqis have become increasingly frustrated with their politicians and many have blamed recent bloodshed on the stalemate.

Last week, at least 150 Iraqis died in violence, including 58 who died in the siege of a Baghdad church on Sunday by fighters affiliated with al Qaeda in Iraq -- one of the worst attacks of the war against Iraq's dwindling Christian minority.