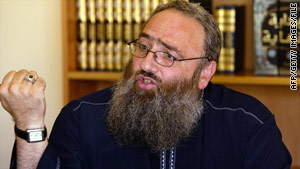 Omar Bakri Mohammed, seen in a 2007 photo, was arrested in Lebanon on Sunday, according to official news media.
STORY HIGHLIGHTS
RELATED TOPICS

Beirut, Lebanon (CNN) -- A radical Islamist cleric in Lebanon facing a life sentence on charges of aiding an al Qaeda affiliate has been arrested following a shootout in the northern city of Tripoli, the country's state news agency reported Sunday.

Omar Bakri Mohammed was convicted in absentia by a military court Friday of charges including membership in an armed group, posession of weapons and explosives and committing crimes against the state, Lebanon's National News Agency reported. He was given a life sentence, which he told CNN on Friday had come as a "shock and surprise."

The news agency reported Sunday that Bakri was taken into custody after a gun battle in Tripoli, but there were no injuries in the shootout.

"Paper formalities were being finalized to hand him over to the Military Tribunal in Beirut," the agency reported.

Bakri said Friday he was not planning to go into hiding and would continue speaking out. Asked what he would do if police were to try to arrest him, he said, "Let it be."

No details of the charges have been released by the government, and the military court does not respond to questions from news outlets. But Bakri denied the accusations on Friday, describing them as an attempt to "suppress the voice of Islam."

The trial of alleged members of the al Qaeda-affiliated group had been under way for several years, but at no point had he been told that he was among those on trial, Bakri said. He has been given 15 days to appeal, but said he had no intention of doing so because he did not recognize the jurisdiction of what he called "a man-made court."

Bakri said that he did not condemn al Qaeda, adding that he believed membership to be a blessing from God. However, he said, he had never been a member himself.

The British government has called Bakri a radical who incites his followers to violence. Bakri has proudly proclaimed himself an extremist, but told CNN he was part of the solution to stopping terrorist attacks and not part of the problem.

He added that he had not preached in public in Lebanon nor had he set up any organizations there. His teaching, he said, was done via the Internet to followers in countries that included Britain, Canada, the United States and Australia.

Bakri lived in Britain for 20 years until shortly after the July 2005 bomb attacks in London, when he fled. Britain's Home Office issued an order in 2005 banning Bakri from returning to Britain "on the grounds that his presence is not conducive to the public good," a Home Office spokesman said at the time.

In the mid-1990s, he formed the now-disbanded radical group Al Muhajiroun, which has has been linked to a string of attacks and foiled plots -- including the July 7 attacks in Britain and a plot to blow up a shopping center using fertilizer-based explosives.

In an interview with CNN in 2005 in London, Bakri said he played no role in the July 2005 bombings, which killed 52 people. He condemned the attack and said he did not know the four bombers involved.

CNN's Nada Husseini and Andrew Carey contributed to this report.