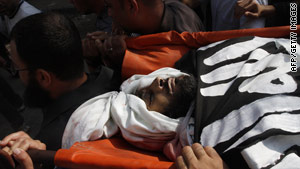 Jerusalem (CNN) -- A day after a senior figure in a Gaza-based Islamist group was slain in an Israeli targeted killing, another militant organization has released a Hebrew language audio message threatening continued rocket fire into Israel.

The message, addressed to "the attacking Jews", was posted on website used by Islamic radical groups and came from a Gaza-based organization calling itself the Jemma Ansar al-Sunna or the Community of Sunna Supporters.

In Arabic accented Hebrew the speaker on the tape warned "the killing of our brothers will not stop us from continuing the Jihad ...and our rockets will continue if you do not leave the land of Palestine."

The message referenced the killing of Islam Yassin the day before in Gaza City. Yassin and his brother were driving Wednesday afternoon when their car exploded.

In a joint-statement released shortly after the explosion, Israel's air force and internal security organization, known as the Shin Bet, acknowledged carrying out the strike claiming the target was a member of a known radical group.

"Islam Yassin was a senior operative in the Army of Islam terror organization..." the statement said.

"Most recently, Yassin had been personally involved in planning and directing a terror attack in which Israelis would be kidnapped from the Sinai Peninsula. "

The strike against the Army of Islam marks the second time this month that Israel has employed targeted killings against the group which it considers a radical Salafist organization with ideological ties to al Qaeda.

On November 3, in a similar strike, another Army of Islam leader, Mohammed al-Namnam was killed by Israel. A military spokeswoman at the time called him a "ticking bomb" who was involved in attacks against Israeli and American targets in the Sinai Peninsula.