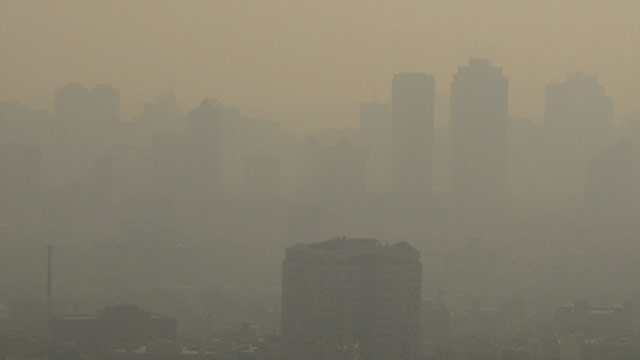 It's difficult to see the skyline of Tehran, Iran, through the thick layer of pollution that blankets the city.
STORY HIGHLIGHTS
RELATED TOPICS

All schools, public offices, universities and banks in the Iranian capital will be closed Wednesday and Thursday, the Islamic Republic New Agency reported.

Residents have been asked to avoid outdoor activities and encouraged to use public transportation.

Health warnings have been issued informing people suffering from lung and heart conditions to stay at home, as well as the elderly and children, according to Iran's Ministry of Health's website.

Police officers, taxi drivers and other workers who are forced to work outside are required to wear surgical masks while on the job, the ministry said.

This is the second time in less than a week Iran has declared a public holiday due to extreme pollution. Tehran shut down last Wednesday to cut down on emissions and traffic.

The government says despite a 40 percent drop in traffic since the last holiday, the pollution has reached critical levels.

CNN meteorologist Mari Ramos says conditions could worsen due to a combination of dry air, low wind and lack of rain.

Iran has fought pollution for decades, specifically in the sprawling Tehran metropolis which is home to an estimated 12 million people. The city already implements traffic plans that require a special permit to drive though downtown Tehran. Cars must also alternate driving days, depending on their license plate numbers.

According to research by Tehran's municipal government, over 80 percent of the pollution is caused by some 4 million cars operating throughout the capital, state-run Press TV reported.

"In our long-term plans to solve the pollution problem, we will get rid of old and dilapidated autos, standardize our auto manufacturing, upgrade the quality of our fuel and our mass transit system," Mohammad-Javad Mohammadizadeh, head of Iran's Environmental Protection Agency said, the semi-official Mashregh news reported Monday.

About 2,500 people in Tehran die every year because of health problems caused by pollution, Iran's Environmental Protection Agency has said.