Tragic twilight of a dynasty 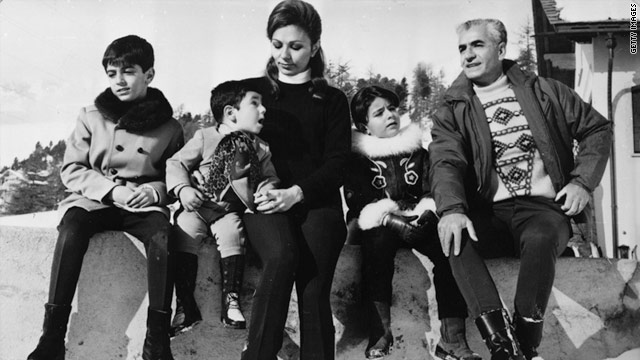 Editor's note: Hamid Dabashi is the author of "Iran: A People Interrupted" and the Hagop Kevorkian professor of Iranian Studies and Comparative Literature at Columbia University in New York. His most recent book is "Iran, the Green Movement and the U.S.: The Fox and the Paradox" (Zed Books, 2010).

New York (CNN) -- For those of us who were born and raised in Iran during the reign of the Pahlavi monarchy, the births of the members of our then-royal family punctuated our lives.

I still remember vividly the day that Crown Prince Reza Pahlavi was born on October 31, 1960.

For every one of his birthdays afterward we were required to sing and dance and parade in our city's major soccer stadium. The subsequent births of the three other children of the late Shah Mohammad Reza Pahlavi (1919-1980) were not as much of a national event, for the nation was now assured who would be next in line. Though of course none of that was meant to be.

The death by apparent suicide of the second son and third child of the late shah of Iran, Prince Alireza Pahlavi, on Tuesday in Boston is an equally remarkable though much sadder occasion. When in the late 1980s I joined the faculty at Columbia University, where the young prince was a student, I had more than one occasion to meet him and the rest of the recently exiled royal family. I remember him as an exceedingly polite, charming and serious young student, though a bit reserved and reticent. By and large, he seemed to mingle with other students naturally and unassumingly.

For someone raised by a devout Shiite mother and a committed socialist father, monarchy has never been my cup of tea. All my adult life I have opposed the Pahlavi monarchy -- and yet the death of the young prince resonates deeply with me as a father of four children.

It is difficult to speculate so soon after the sad suicide of any young man. But whatever the clinical diagnosis of depression and despair might be in this case, as suggested by his older brother in his official statement, I believe a sense of deep anomie and frustration must have been at least a contributing factor.

Like other young Iranians, the late Alireza Pahlavi and before him his late younger sister, Leila Pahlavi, who also committed suicide in London in 2001, must have wanted to be a source of good for their homeland. There is no reason to doubt that possibility no matter what our politics might be. But historical circumstances and the ending of monarchy in Iran did not allow that to happen, and in exile the former queen and her four children have not been able to find a viable way of having a positive impact in their homeland.

I believe that monarchy has no future in Iran and has long since lost its institutional validity. Even in European democracies such as Sweden or the United Kingdom, monarchy seems like a strange antiquarianism, a certain harmless and perhaps even occasionally amusing carnival, with colorful pomp and ceremony, that is certainly good for the business of tourism, but ultimately is best staged and packaged in the Disney World version of it here in the United States.

The Iranian revolution of 1977-1979 was a massive, broadly based, social uprising, and whatever divided the revolutionary forces, the end of monarchy was one factor on which they all agreed.

As a result, I don't believe that the former Crown Prince Reza, the sole surviving son of the late shah, as an icon of that defeated monarchy, has any future in the democratic aspirations of his nation, for which many Iranians are currently braving the atrocities of the Islamic republic. But certainly Reza Pahlavi as an Iranian has every right and every reason to hope to be part of that democratic future.

That future is no longer one of military coups, foreign invasions or a revolutionary uprising. I believe that everything we see today in Iran speaks of a collective wish of a young, hopeful and forgiving generation for a nonviolent transition to democracy. Reza Pahlavi should be part of that transition, if he were once and for all to renounce his claim to the "throne." For I believe there is no throne left in Iran, either led by a dynasty or by mullahs.

Iran's history of the last 200 years includes two monarchic dynasties -- the Qajars (1789-1926) and the Pahlavis (1926-1979). But monarchy became an outdated institution even before the ouster of the Pahlavis in 1979. The Pahlavis were, like all other royal families, accustomed to a life of wealth, luxury and power -- and they violently and abruptly lost that life.

In recent years, Leila and Alireza must have watched with a combination of admiration and regret the historic uprising of their own generation for democracy in Iran -- admiration that this massive social uprising was happening in their homeland, regret because they could not imagine or craft a place for themselves in that uprising.

Of course, this tragedy above all is hard to bear for the prince's grieving mother, Queen Farah, and his siblings.

There is no comparing the suicide of Prince Alireza with the death of thousands of other young Iranians who for the sin of dreaming a better future for their homeland perished during the reign of the Pahlavi dynasty -- or with those even more thousands whose lives have been wasted by the Islamic republic. But still it is a sad day for the young generation of Iranians of whatever political persuasion they might be, to see a young life lost in despair.