U.S. must choose sides in Egypt

By Blake Hounshell, Special to CNN.com 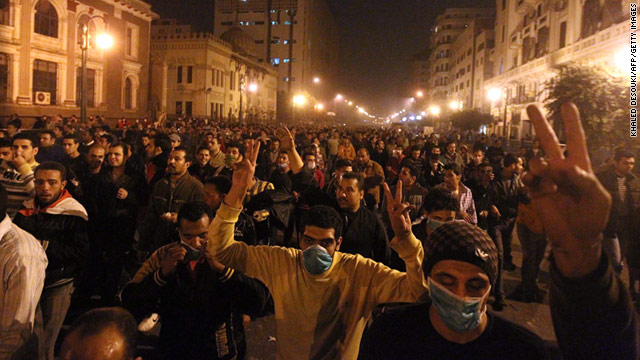 Editor's note: Blake Hounshell is managing editor of Foreign Policy. Hounshell formerly lived in Cairo, where he worked for the Ibn Khaldun Center for Development Studies.

For years, Egyptian demonstrators raged against Hosni Mubarak's military regime, calling on their fellow citizens to take to the streets and oust the agents of their oppression. For years, earnest U.S. officials urged Mubarak to open up Egypt's political system, crack down on the grand and petty corruption that pervades Egyptian life and deliver economic progress to the masses. For years, analysts -- myself included -- dismissed the possibility of real change as long as Mubarak, now approaching his 83rd birthday and his third decade in power, still breathed.

It seems the Arab street had other plans.

Inspired by events in Tunisia, a smart, tech-savvy network of young activists seized upon January 25 -- a holiday ironically celebrating the country's police -- to organize mass rallies demanding Mubarak's ouster. The Egyptian interior minister dismissed them as "a bunch of incognizant, ineffective young people." Longtime Egypt watchers tried to keep their hopes low, expecting the same disappointing results as before.

Now, four days into an uprising in the Arab world's most populous country, the beating heart of its media culture, and the historical strategic leader of the region, it's no longer possible to argue that Egypt is a stable country.

The situation is changing rapidly, but what we know is this: The country is virtually cut off from the outside world. Egyptians from across the social and geographical spectrum -- from poor, jobless young men along the Suez Canal to upper-class women in posh Cairo suburbs to workers in the teeming Nile Delta -- are in an uproar.

The ruling National Democratic Party's headquarters has been set on fire. The army has sent troops and armored vehicles into the streets to enforce a curfew as defiant demonstrators torch police stations and vehicles.

U.S. Secretary of State Hillary Clinton, speaking slowly and carefully to avoid making a mistake at a sensitive moment, urged the Egyptian government Friday to allow its people to protest peacefully. But, she added, "We want to partner with the Egyptian people and their government" and called on Mubarak to make reforms. All week, the U.S. message has been largely consistent: Egypt is a key ally, both sides should refrain from violence and the government should respect the legitimate grievances of the Egyptian people.

We are long past the point where such milquetoast appeals to the good will of the Mubarak regime -- a system kept in power only by brute force and sheer inertia -- bear any resemblance to reality. If the Egyptian government wanted to embrace political change, what has it been doing for the last 30 years?

It's time for the United States to choose: Does it really support the democratic aspirations of the Arab world, or, when push comes to shove, will it tacitly side with the same autocrats it has been propping up for decades?

For it's not just Egypt hanging in the balance Friday night. An entire generation of Arabs is watching this drama play out on the streets of Cairo. In his landmark speech there last year, President Obama warned the region's entrenched rulers, "You must maintain your power through consent, not coercion."

The Arab world has spoken: We do not consent.

It's past time for America, for once, to be on their side.

The opinions expressed in this commentary are solely those of Blake Hounshell.