Reagan, the myth and the man

By Will Bunch, Special to CNN 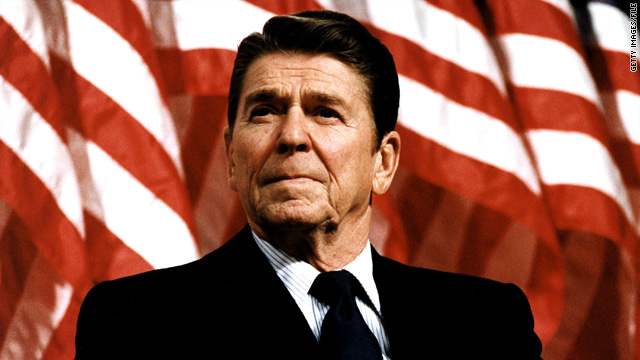 President Ronald Reagan, who was born 100 years ago on February 6, speaks at a rally in 1982.
STORY HIGHLIGHTS

Editor's note: Will Bunch is author of "Tear Down This Myth: How the Reagan Legacy Has Distorted Our Politics and Haunts Our Future,"as well as "The Backlash: Right-Wing Radicals, High-Def Hucksters and Paranoid Politics in the Age of Obama." He is senior writer for the Philadelphia Daily News, where he writes the Attytood blog, and a senior fellow for Media Matters for America, a progressive research center monitoring the media.

Philadelphia (CNN) -- The first thing that comes to mind about Ronald Reagan on the eve of his 100th birthday is neither a touchstone of the Gipper-worshipping right wing -- his "tear down this wall" speech in West Berlin or telling President Jimmy Carter "there you go again" -- or the usual liberal counterpoints such as declaring ketchup as a vegetable or saying to a national audience that "facts are stupid things."

In 2011, I think instead about the world's largest Ronald Reagan statue -- a hulking, 10-foot tall bronze American idol, which sits not in Washington or Sacramento or Hollywood but in the most unlikely setting of Covington, Louisiana. It's a strange place for it because there's no reason to believe that the 40th president ever set foot in the small town on the north shore of Lake Pontchartrain.

But the massive monument towers over a Covington trailhead because of Reagan's one legacy to the small town -- a billionaire. Patrick Taylor launched Taylor Energy Company in 1979, two years before Reagan came into office with plans for massive tax cuts for the wealthiest Americans and for Big Oil.

When Reagan died in 2004, Taylor told Covington he would donate the statue. Taylor died five months after Reagan, but the project was seen to its completion by his widow, Phyllis, the richest woman in Louisiana, worth an estimated $1.6 billion.

The Covington statue shows the pro-business and pro-military Reagan in a tight-fitting business suit, saluting. Shortly after its dedication in April 2009, it was the place where several hundred members of a newly formed Tea Party group held a rally.

The emcee, local political commentator Jeff Crouere, told the Tea Partiers -- not accurately -- that it was Reagan's 1981 tax cuts that created 21 million jobs, and that President Barack Obama had created more debt in three months than all of the presidents who came before him, which not only was not true but overlooks the record run-up in debt that occurred during Reagan's presidency.

Both the towering slab of stone -- and the untruths told in its shadow -- epitomize what Ronald Reagan has become as the nation prepares to celebrate his centennial on February 6: not a real flesh-and-blood man but a myth. And this is not a harmless myth but a political fairy tale that has brought disastrous real-world consequences for America and its citizens for more than a decade.

This is not a harmless myth but a political fairy tale that has brought disastrous real-world consequences...
--Will Bunch
RELATED TOPICS

In the name of the Gipper, the nation has not only encouraged unbalanced budgets and corporate greed beyond anything that Reagan would have imagined or condoned, but waged a bloody war in Iraq that Reagan biographers such as Lou Cannon, who covered him for three decades, agree he would have never supported.

Instead of acknowledging that Reagan's 1980s presidency has been misrepresented to create disastrous policies in the 21st century, the body politic is doubling down on the Gipper -- on both sides. The Republican presidential sweepstakes for 2012 is shaping up as a competition for who can cite Reagan most often, while Obama has been said to be engrossed in Cannon's exhaustive and balanced portrayal of Reagan's up-and-down presidency, "Role of a Lifetime."

In a recent op-ed for USA Today, Obama praised Reagan for "a spirit that transcended the most heated political arguments, and one that called each of us to believe that tomorrow will be better than today."

But unfortunately, much of the Reagan era typically invoked by today's political leaders is the stuff of legend -- tracing back to the late 1990s when Democrat Bill Clinton was starting his second term, and the American conservative movement was at low ebb.

A group of Republican insiders led by lobbyist Grover Norquist launched something called the Ronald Reagan Legacy Project. Ostensibly, the group's audacious goal was to name something for Reagan or place a monument in every county in America. While they're not there yet, the results are impressive, from a web of Ronald Reagan Boulevards and Freeways to Mount Reagan in New Hampshire to that massive statue in Louisiana.

But the project's real purpose in creating an aura around a Republican icon was to then use that glow to sell an ultraconservative agenda not really rooted in Reagan reality. The 1981 tax cut is grossly oversold as the cause of that decade's economic comeback, but a series of tax increases that Reagan signed, starting in 1982, are almost never mentioned. Also receiving short shrift are the facts that Reagan increased the size of government and created more debt than all the presidents who came before him -- or that under his watch the American consumer began to get hooked on credit cards.

The Gipper's Hollywood-inspired brand of tough talk was frequently cited as a reason for a pre-emptive war in Iraq and other militaristic schemes -- even though during the 1980s Reagan refused to retaliate for terror attacks if innocent civilians might be harmed and also vigorously opposed the use of torture.

But the greatest irony may be that in their eagerness to fashion a new far-right ideology in Reagan's image, conservatives are also forced to ignore some of the very best things about his presidency. The image-makers portray Reagan as unyielding when in fact he compromised with Democrats on key issues from taxes to preserving Social Security.

Their strategy also means playing up the verbal bravado of his "tear down this wall" speech in West Berlin while overlooking that his main goal at that time was eliminating nuclear weapons. To do that, he was willing to talk to his supposed enemy, Soviet leader Mikhail Gorbachev.

The very human Ronald Reagan's very real quest for peace and his optimistic vision for America at home are things to actually honor this Sunday, the day of his centennial. Too bad that millions of Americans will be worshipping a Reagan that bears as much resemblance to the man as a 10-foot bronze statute.

The opinions expressed in this commentary are solely those of Will Bunch.