By Eric Deggans, Special to CNN 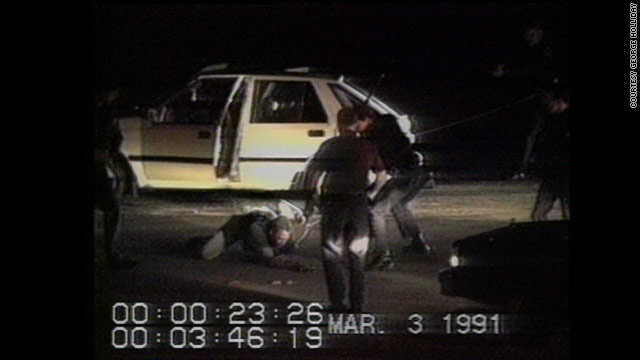 An image from the video of the 1991 Rodney King beating, enhanced for the ensuing federal trial.
STORY HIGHLIGHTS

Editor's note: Eric Deggans is TV and media critic for the St. Petersburg Times and a commentator for NPR. For a look back at the Rodney King beating and the events that divided Los Angeles and the nation, watch "CNN Presents: Race and Rage," Saturday, March 5, at 8 p.m. ET.

(CNN) -- It wasn't the first time a nonprofessional picked up a camera and somehow documented a historic event.

But George Holliday, a plumber from Argentina, did much more than add to the history of citizen journalism 20 years ago when he trained his just-bought Sony Handycam on a pack of angry policemen beating Rodney King to a bloody pulp right outside Holliday's apartment in Los Angeles.

Holliday became the leading edge in a revolution of technology and social attitude that has made amateur reporters of us all.

In the process, journalism has increasingly transformed from a craft to an act; something a random club-goer initiates when "Seinfeld" star Michael Richards tosses the n-word around onstage, or a traveling entrepreneur from Florida can practice when a passenger plane lands in the Hudson River, sending a picture via Twitter that travels across the globe in an instant.

Of course, when Holliday captured police delivering more than 50 blows to King on March 3, 1991, the technological times were different.

The internet was barely more than a curiosity at colleges, largely a text-based message service with no icons or attractive graphics.

Cell phones were the size of concrete bricks, and nearly as heavy. Video-sharing websites, portable telephones with cameras and digital video were still mostly dreams in science fiction stories.

But more than that, the idea that anyone could capture news on their own wasn't yet part of the culture. News was what Dan Rather and Tom Brokaw told us it was.

Instances in the past where average citizens had snapped a photo or filmed historic events -- Abraham Zapruder's still-riveting images of John F. Kennedy's 1963 assassination stands as a singular, brutal example -- were curious accidents, not the leading edge of a mighty wave.

Until the Rodney King video.

Holliday couldn't even broadcast the images he shot on his own. After attempts to find out how King was doing days after the beating led nowhere, the plumber took his video to Los Angeles TV station KTLA, which aired the footage and interviewed him, sparking a worldwide frenzy, according to his 2002 interview with the British newspaper The Sun.

First, the film led to widespread disgust at the way police treated an unarmed black man. Later, when several officers were acquitted by a jury that included no black people, five days of rioting tore through Los Angeles' black neighborhoods.

One irony recently noted by the Poynter Institute's Steve Myers: The rioting was also documented by amateur videographers, including one who immortalized the beating of white truck driver Reginald Denny by black rioters.

That sparked a fresh round of debates over race, rioting and social justice. As conflict over police treatment of the poor and ethnic minorities rose in the wake of King's beating and the court verdict, activist organizations such as Berkeley Copwatch stepped up efforts to capture the actions of police officers, hoping to prevent abuses or document them.

CNN's iReport effort -- along with MSNBC's First Report and Fox News Channel's UReport -- was a recognition of a trend already affecting TV news, as citizens armed with the latest video technology were encouraged to offer images of events to broadcasters.

Citizen journalism played a major role in the coverage of the April 2007 shootings at Virginia Tech. Student Jamal Albarghouti gave CNN his cell phone footage of people running as gunfire sounded when a gunman killed 32 people on the college campus.

The idea that anyone could capture news on their own wasn't yet part of the culture [in 1991]. News was what Dan Rather and Tom Brokaw told us it was.
--Eric Deggans, media critic
RELATED TOPICS

Now, every person with web access and a cell phone is a media outlet, capable of committing an act of journalism the moment a news event comes near. In St. Petersburg, Florida, that meant a woman who used her Twitter feed to promote sexy webcam videos briefly transmitted details on the police's siege of a nearby house where a man killed two officers.

After the incident, she went right back to tweeting her X-rated links.

These days, we expect every event to be documented. A persistent argument used to debunk claims Tea Party members shouted racial slurs at black Democratic lawmakers during the passage of health care legislation last year is the absence of any viral video depicting it.

At a time when every significant moment is recorded by someone, the lack of video evidence can now be used as proof of a different sort.

In this world, our online life can become a personal media brand with worldwide reach, should we capture the right moment and deliver it to the globe. As a generation matures unaware of a life without online connection or social media, we have a population ready to document everything in their lives, including any news that may cross their path.

And it all started with a plumber who walked outside his home to see why police sirens were keeping him up at night.

Thanks, George Holliday. Not just for saving a hapless man's life and putting the question of police methods in poor minority communities on the front burner, but for providing our first peek at a world where the ultimate passion of journalism -- to document impactful events as completely as possible and let others experience them quickly -- has been passed along to everyone.

Even in the days of "Jersey Shore" and Charlie Sheen, we all seem a bit better for the experience.

The opinions expressed in this commentary are solely those of Eric Deggans.