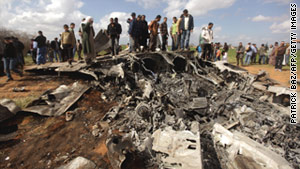 People gather at the wreckage of a U.S. F-15 fighter jet, southeast of Benghazi, Libya, on March 22, 2011.
STORY HIGHLIGHTS

(CNN) -- Since the U.N. Security Council authorized action Thursday to protect civilians from the effects of Libya's civil war, a vigorous debate has erupted over the U.S. role in the intervention.

Here are links to the writers' op-eds and brief excerpts:

Regardless of how the intervention plays out, Libya consumed Obama's attention during a trip intended to boost U.S. economic and security cooperation with key countries in the Western Hemisphere. As he worked to manage an urgent crisis while sustaining focus on an over-the-horizon but nonetheless vital foreign policy objective, Obama was in a predicament familiar to his predecessor. ...

Obama could have canceled his Latin American trip to remain in Washington while the Libyan bombing campaign commenced. Instead, braving criticism at home, he embarked on a tour amounting to a long-term investment in America's geopolitical position. The United States has historically overlooked Latin America.

Yet today, the region constitutes a market nearly as large as China's, boasts an influential rising power in Brazil and hosts dangerous criminal insurgencies that respect no borders. Whatever U.S. interests exist in Libya -- there is room for reasonable debate -- the country does not outweigh the rest of the Western Hemisphere.

Gloria Borger: Obama and Libya: Tell us how this ends

In theory, the Obama doctrine -- which is clearly attempting to change the storyline of American military intervention in the Arab world -- is a game-changer. In a way, Barack Obama is still behaving as he did as the editor of the Harvard Law Review, hanging back until a center of gravity is established.

But in the specific case of Libya, the caution can be confusing: Try as we might, there's no way to keep American participation in any military action in the back seat, no matter who flies the first planes. There's no way to ensure that any multilateral coalition works. And, most important: Is there a way to leave if Gadhafi stays?

And if we win (whatever that means), who's left? Who are the Libyan rebels, if they are anything cohesive at all? And what if the civil war flares up after we tamp it down? Is that our problem? Or some other country's problem? Clearly, the ambiguity is exactly what Obama was trying to avoid.

William Bennett: It's long past time for Gadhafi to go

Gadhafi is a brutal dictator, an international outlaw, and a sponsor of terrorism with gallons of American and other blood on his hands. Thus, to the question, is it in America's vital interests to see Gadhafi go, the answer can only be "yes."

What could very well be worse than taking out Gadhafi now would be a surviving, embittered and emboldened Gadhafi dictator having survived and prevailed over another U.S. attack -- a hero-dictator willing to link up with other terrorist organizations or states set on attacking the United States and the West.

The rest of the world is watching how we follow through with Libya. Leaving Gadhafi in power, yet again, will send precisely the wrong message to others in his league -- be they terrorist dictators in Iran or elsewhere.

Rep. John Larson: Obama should have given Congress more say

There is no question -- Col. Moammar Gadhafi is committing atrocious acts of violence against his own people. President Obama and Secretary of State Hillary Clinton should be commended for working with the United Nations and our allies to shape a strong international response.

With that said, I am very concerned that the president committed America's military to operations in the region without true consultation with the Congress. Call this what they will, we are waging war -- while still engaged on two other fronts -- which will likely require substantial resources over a long period of time.

Will the U.N. and the coalition be satisfied with a political stalemate on the ground, in which the eastern portion of the country achieves de facto and de jure independence?

The cease-fire called for in the resolution would seem to rule out any renewed offensive activity by the opposition. So unless there is some means to apply additional leverage, there may be two Libyas: one a vengeful dictatorship, the other a fledgling democracy needing long-term international protection.

David Gergen: What is Obama's endgame in Libya?

The head-snapping change in policy toward Libya has everyone guessing where the Mideast is heading, whether the U.S. has a good handle, and most of all, what President Obama is trying to achieve...

The big question mark is the president himself. Rebounding from his electoral defeats last November, he seemed to be asserting a much firmer grasp on power, but in recent weeks, he appears to outsiders as someone who has slipped back into a haze of caution. The Economist this week is even questioning his political courage. As he sends U.S. troops into harm's way, many in Washington are now waiting to see which Obama now emerges. Much rides on the outcome.

The military intervention that President Obama authorized against Libya on Saturday -- eight years to the day after President George W. Bush announced the commencement of "Operation Iraqi Freedom" -- is a quite different operation from the 2003 invasion of Iraq.

Beyond the obvious difference that Obama has not authorized the use of U.S. ground forces in Libya, there are other differences to consider:

First, the Obama administration was handed a gift by the Arab League, which in its more than six-decade history has garnered a well-earned reputation as a feckless talking shop, but unusually took a stand one week ago by endorsing a no-fly zone over Libya. The unexpected action by the Arab League gave the administration the impetus and diplomatic cover to then go to the United Nations Security Council to secure a broad resolution endorsing not only a no-fly zone, but also allowing member states to "take all necessary measures" to protect civilians in Libya.

This is in contrast to George W. Bush's ineffectual attempts to gather international support for the invasion of Iraq in 2003. There was no U.N. resolution explicitly authorizing the use of military force against Hussein, and no Muslim countries participated in the American invasion and occupation of Iraq.