Is nuclear energy worth the risk? 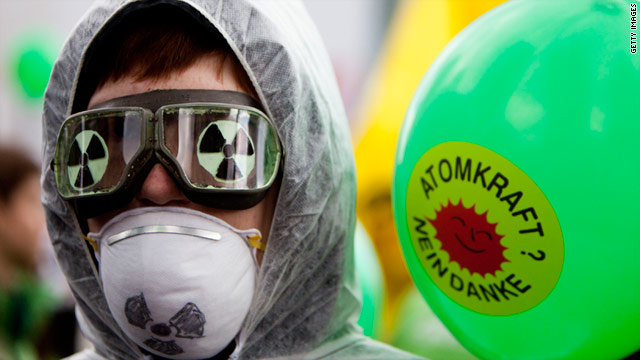 A German anit-nuclear protester makes his position clear. But can the world do without nuclear power?
STORY HIGHLIGHTS

CNN's panel debate on the future of nuclear energy takes place later this month. Here Malcolm Grimston of Chatham House and Kumi Naidoo of Greenpeace express their opinions on the nuclear energy issue. Add you voice to the debate by leaving a comment or question we can use in the show.

Explosions at the Fukushima Daiichi nuclear plant, leaks of radioactive materials into the land and sea, heroic workers braving significant doses of radiation, material detected overseas -- though not in the same league as Chernobyl this is certainly a serious nuclear accident. (Full coverage of the nuclear crisis in Japan)

The effects on nuclear power globally of the last major accidents -- at Three Mile Island in 1979 and at Chernobyl in 1986 -- were severe.

Several countries abandoned plans to build nuclear plants or decided to phase out their existing reactors. New safety requirements were hugely expensive -- extra costs, long delays in construction programs and, at Shoreham in New York State, refusal of an operating licence to a completed plant because it proved impossible to devise an evacuation plan.

But Fukushima does not change the basic arguments over nuclear energy.

Of the 13 reactors which were subjected to the Scale 9 earthquake and 14 meter tsunami, only the four oldest ones (all commissioned in the 1970s using 1960s technology) suffered significant problems.

The incident demonstrates the extraordinary safety standards and robustness of more modern nuclear power stations. Against the background of an unimaginable tragedy that has taken more than 12,000 lives so far, it is extremely unlikely that the radioactive emissions from Daiichi Reactors 1 to 4 will add a single long-term casualty, with the possible exception of some of the emergency workers.

And the basic question remains; if not nuclear, what?

In Japan the future has come early. Japan imports 84% of its energy requirements. It has no oil, no gas, hardly any coal left and limited renewable options. Heavier dependence on imports from the former Soviet Union countries and the Middle East, with all the political implications, is not attractive.

Climate change was a scientific curiosity in 1986, now it is the major environmental issue of our times. Three Mile Island and Chernobyl were both new reactors and the accidents highly relevant to new build -- Fukushima involves 1960s technology facing unprecedented natural challenges (and largely coming through them).

Today's new reactors are designed not to need power to cooling pumps in order to remain safe.

Of course we need to check the standards of older reactors and examine how spent fuel is managed, and there may be lessons about information management as well.

But the case for nuclear was never that it is perfectly safe -- it is that the certain challenges of growing energy demand, depleting hydrocarbon reserves and climate change have no easy solutions but nuclear can help. Nothing that has happened in the last month changes that.

No future for nuclear energy

Nuclear power with all of the attendant dangers of nuclear proliferation, catastrophic accidents and long-lived deadly radioactive waste can make at best a negligible impact on climate change.

It is used uniquely to generate electricity. It does not power our cars, our airplanes, our trucks or our container ships.

According to the conservative International Energy Agency even if a new nuclear reactor was switched on every ten days between now and 2050 it would lead to a carbon emissions cut of less than 4%.

There is a safer, more secure and more equitable way to fuel our societies, Greenpeace and the European Renewable Energy Council have developed an energy scenario which shows how 95% of the worlds energy needs can be met by renewable energy sources by 2050: reliable energy, with more jobs, more equitable power distribution, and no "peak solar" or "peak wind" fuel price variations. Under this plan no new nuclear reactors would be ordered.

But this isn't just a theory, it is happening. In Spain today, 35% of the energy mix comes from renewables, 16% of it from wind. Portugal shifted its electrical grid from 15% to 45% renewables in the space of just 5 years. And, Germany's installed solar energy capacity is greater than all six of the Fukushima reactors combined.

As we approach the first anniversary of the Deepwater Horizon oil spill and contemplate the nightmare currently unfolding in Japan, it is worth opening a real dialogue with those who would support dangerous energy choices like fossil fuels and nuclear energy.

The dangers involved are too great to be dismissed and the risks unnecessary. The Earth has provided us with a sustainable solution: an energy (r)evolution based only on clean, safe and secure renewable sources of energy.

The opinions expressed in this commentary are solely those of the authors, but what do you think? Have your say by leaving a comment.