By Ken MacLean, Special to CNN 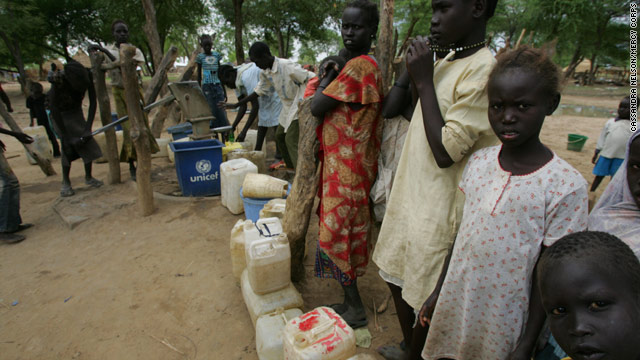 Some of the thousands of people who were displaced by recent violence in the Abyei area fled south to the town of Agok.
STORY HIGHLIGHTS

Editor's note: Ken MacLean is the South Sudan country director for Mercy Corps, a global humanitarian organization which has worked in Sudan since 1985.

(CNN) -- On Saturday, southern Sudan will become the independent country of South Sudan. This will be an historic event: the culmination of a six-year process that ended a long, brutal civil war that caused the deaths of millions. Although the road to independence has been hard, people look toward the future.

This was a joyful week in the nation-to-be, and thousands of global dignitaries and well-wishers travelled to the capital city of Juba for celebrations. But after July 9 comes the tough work of building a country that already faces significant obstacles.

Here are three challenges that the new nation will wrestle with:

1. Poverty: Sudan ranked 154 out of 169 on the United Nation's 2010 Human Development Index, and South Sudan will be one of the poorest countries in the world, with limited roads, sporadic electricity and a woefully inadequate number of schools and hospitals. The human toll of poverty is painfully clear: more than a quarter of southern Sudan's 8 million people do not have enough food, and more women die in childbirth than almost anywhere else in the world.

2. Conflict: Violence has flared in recent weeks along the border with Sudan. More than 100,000 people fled from the disputed Abyei region, where it is hoped that a tentative peace agreement and Ethiopian troops can halt the fighting. In Southern Kordofan State -- part of the north -- attacks forced more than 70,000 people to leave their homes. The violence is not all about north vs. south. Cattle rustling, heavily armed rogue militias and crime have added to the violent mix that terrorizes civilians.

3. Economic woes: South Sudan will face many economic hurdles. The economy is heavily dependent on oil, a situation that could breed corruption and stifle other industries. The people of the south rely upon trade from the north for food and fuel. With strained north-south relations, trade has ground to a halt, creating severe shortages, price spikes, power outages and long fuel lines. In addition, the government will unveil a new printed currency in the next few months -- without a definitive plan or sufficient cash reserves. All of these factors could create economic instability.

These challenges have led some analysts to call South Sudan "the next failed state." That doesn't have to be this new nation's future, and for the sake of the 8 million people who live there, Mercy Corps and other groups are working to ensure that it's not.

There are compelling reasons to be optimistic about South Sudan's future:

1. People are excited and hopeful. The nation's success will depend on the involvement and leadership of its people, who are energized and eager to start building their new country. Unlike just five years ago, people talk less about the legacy of war and more about hope for the future. As a young teacher named Aguer recently told me, "I feel great and excited about our future ... I am focused on what I should do to serve my people. What should I do to make this nation like other great nations?" South Sudanese such as Aguer know there are challenges, but they are now in charge of their destinies and eager to make their country prosperous. There is a huge opportunity to positively channel this positive energy and excitement.

2. Successful referendum was a good start. In January, southern Sudan held a peaceful, fair and inclusive referendum in which nearly 99 percent of participants voted for independence. This was a huge achievement, and the people of the south made their voices heard. South Sudan needs to build on this success to form a government that's responsible and responsive, and a citizenry that's engaged and holds government accountable. Special efforts should be made to ensure that women and young people have a stake in their government and communities.

3. Business can help. The private sector can bring South Sudan much-needed goods, services and jobs. With abundant arable land and a favorable climate, agriculture holds particular promise. Farmers -- many of whom use subsistence methods and barely grow enough to get by -- have a steep learning curve, but South Sudan has the potential to be a regional breadbasket. New technologies -- such as mobile networks that provide farmers with technical assistance, financial services and market data -- can give agriculture a boost.

South Sudan is being born into a difficult situation and will have serious growing pains, but with the right mix of peace, private investment and assistance from the international community, it can succeed.

Mercy Corps is among those in the international community collaborating with citizens groups, local governments, farmers and businesspeople to help South Sudan realize its full potential. We know that a stable, prosperous South Sudan will be good for Africa and the world, but especially for the country's own people, who've survived so much with their hope amazingly intact.