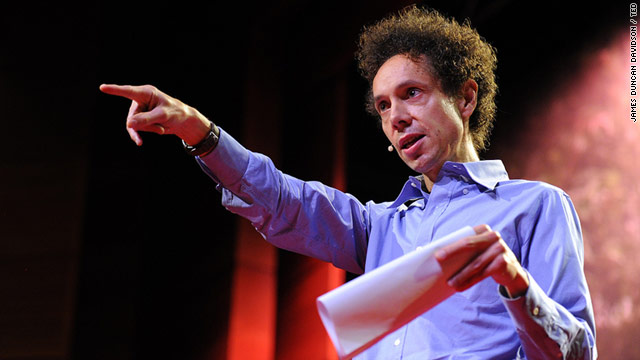 Malcolm Gladwell said the story of the Norden bombsight is a cautionary tale about the promise of technology.
STORY HIGHLIGHTS
RELATED TOPICS

Edinburgh, Scotland (CNN) -- By the end of World War II, the United States military had spent $1.5 billion on the Norden bombsight, a device that promised to be so accurate it was said a plane could drop a bomb in a pickle barrel from 20,000 feet, according to author Malcolm Gladwell.

Speaking Friday on the last day of the TED Global conference, Gladwell said the device, designed by engineer Carl Norden, indeed could allow bombers to hit their targets -- but only under perfect conditions, such as a cloudless sky. In the real world, the sight often failed to find its mark.

In a raid on a German chemical plant, only 10% of thousands of bombs hit the target, said Gladwell, author of "The Tipping Point" and other best-sellers.

He posed the question: Why do people place so much faith in technology such as the Norden bombsight to solve problems?

Today, the U.S. military has a bomb-delivering device that truly can achieve great accuracy -- the drones firing missiles to attack militants in Pakistan and Afghanistan. Yet Gladwell argued that drones aren't necessarily accomplishing more than the flawed World War II-era bombsight; he said suicide attacks against Western targets have increased.

Gladwell's question was one of a series of thought-provoking issues raised at the conference in the Scottish capital. TED, a nonprofit whose motto is "Ideas worth spreading," holds two high-profile conferences a year and distributes talks through its website. (Selected talks are also made available on CNN.com through a partnership with TED.)

Meeting for the first time in Edinburgh, TED Global drew 850 people, from 70 countries.

Among the other questions raised in talks at the conference:

• Can eight hugs a day make us happier? Paul Zak, a professor at Claremont Graduate University, who may be the only economist in the world to literally draw blood in his research, tracks levels of the hormone oxytocin, which he said his experiments show tend to rise when people place their faith in each other. He said hugging strangers is one way to stimulate production of oxytocin.

• Why can't we feed the world's one billion hungry people? Josette Sheeran, executive director of the United Nations' World Food Programme, said a 17-cent package of nutrients with a chickpea base can meet the needs of a hungry infant, and more than enough food is grown to feed everyone, but still many wake up every day not knowing how they will be able to feed themselves. Her organization is scrambling to meet the threat of severe famine in the Horn of Africa.

• What do China's young people want? TV host and media entrepreneur Yang Lan, often called China's Oprah, painted a dramatic picture of the frustrations of young people in China. She said their nation lives with income inequality that is now greater than in the U.S., and young people want social justice and government accountability. They have to support aging parents, have generally low incomes and can look forward to working for as long as 30 or 40 years to pay for their first apartment.

• What can atheists learn from religion? Philosopher Alain de Botton said those who reject religion often make the mistake of dismissing the many benefits it provides. While not believing the doctrine of any religion, he said he admires how religious institutions transmit ideas, helping people meet their needs for consolation and guidance. In the secular world, we assume that if an idea is important, "we'll bump into it," he said. In the religious world, calendars remind people on specific days of virtues and moral imperatives. "Atheism 2.0" would look for ways to provide the equivalent of these benefits to nonbelievers, he said.

• Has the West lost its work ethic? Economic historian and Harvard professor Niall Ferguson counts the work ethic as one of "six killer apps" responsible for the "great divergence," the centuries-long dominance of the West over the East in economic, political and military power. (The other five "apps" are competition, the scientific revolution, property rights, modern medicine, and the consumer society.) Today the average Korean works 1,000 hours more per year than the average German, he said. Although he said the decline of the West isn't inevitable, the rise of the East is incontrovertible: "The great divergence is over, folks."

• Can a plane also drive to its destination? Anna Mracek Dietrich presented the case for "The Transition

," an airplane her company is developing that also can serve as a car. It flies from one general aviation airport to another, but can also travel at highway speeds and meet auto safety standards. Its wings retract so it can be stored in an ordinary garage and it is fueled by unleaded auto gas, rather than more expensive aviation fuel. If the weather's too bad to fly, then the owner of such a plane could choose to drive. She said 100 people have put up $10,000 deposits to show their interest in buying the Transition, which she said will go into production by the end of next year. Dietrich estimated the price of the plane/car at $250,000 to $300,000.

• Can liars be detected? Author Pamela Meyer said people lie from 10 to 200 times a day. Many of these are harmless white lies -- "I just fished your e-mail out of my spam folder" -- but often deception can have harmful consequences. She showed videotapes of untruths told by Bill Clinton and John Edwards in an effort to show patterns that could serve as telltale signs of deception.

• What can doctors do for the dying? Liver transplant surgeon and writer Pauline Chen said she learned through her own experience how important it is for doctors not to "run away" from dying patients and to recognize that medicine can't always cure. Abraham Verghese, also an author and physician, said he learned that the ritual of a physical exam can powerfully communicate to a dying patient that a doctor will be there through the end, no matter what happens.

• Why are we still in Afghanistan? British Conservative MP Rory Stewart, who has written about his travels in Afghanistan, said the successful Bosnia and Kosovo interventions of the 1990s gave the West false confidence about the potential gain from intervening militarily in foreign countries. Year after year, generals and diplomats have predicted that next year will be the "decisive year," he said, yet the Afghanistan war drags on, costing lives and tens of billions of dollars. The surge of troops has increased the violence in Afghanistan, rather than reducing it, he said.

Stewart said the presumption that a withdrawal from Afghanistan would enable the Taliban to retake the country and invite back al Qaeda is wrong; and that even if al Qaeda were invited back, it wouldn't likely pose an existential threat to Western countries. And if the goal is fighting terrorism, he said, Pakistan is a more serious threat than Afghanistan.