Why Americans should care about famine in Africa 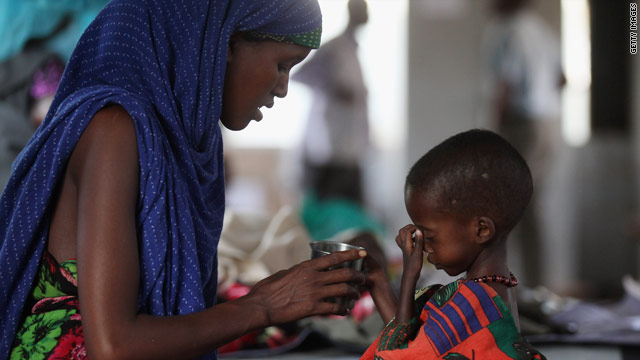 A refugee mother and child in a ward of the Medecins Sans Frontieres Hospital in the Dadaab refugee settlement on July 22.
STORY HIGHLIGHTS

Editor's Note: William Frist, the former Republican majority leader of the U.S. Senate, is a physician.

(CNN) -- Why should Americans care about the unfolding crisis in Somalia when our own economy is in chaos?

To shed some light on that question, I joined Dr. Jill Biden, wife of Vice President Joe Biden, on a fact-finding mission over the past several days to a Somali refugee camp close to the Kenya-Somalia border.

We saw the answer as we listened to a grief-stricken mother of five, who had marched for 15 days across the parched Somali land to find food and security in a border camp. They arrived malnourished, sick and thirsty to a camp of 430,000 other refugees. They competed with 1,500 others who had made it to the camp that day, only to find it filled to capacity. Inside they would find adequate food and water.

They would find the vaccinations that are saving the lives of thousands. They would survive because of the generosity of Americans (the U.S. is responsible for 47% of the food being provided) and increasingly because of members of the world community who are standing up, in spite of challenging times in their own communities.

More than 29,000 children have died over the past three months in what is the most acute food security emergency on Earth. It's worsening by the minute and outstripping available supplies. Thousands never make it to the camps, and those that do might have to wait outside the confines where 50,000 others are waiting.

Drawing from my experiences as a doctor in refugee camps in southern Sudan and Darfur, the conditions Biden and I saw this week constitute among the worst, the result of a cruel nexus of war, drought and poverty. The issue is complex, but we know with certainty that a primary focus on health greatly improves the chances of preventing death and of establishing security throughout the Horn of Africa. It's a worthy investment.

Drought occurs regularly throughout the region, but a dysfunctional government in Somalia is incapable of responding. Direct access by the international aid community is difficult and dangerous. This is why our focus on assistance in Ethiopia and Kenya is essential.

The five regions of famine in Somalia lead to death locally and to an exodus of children and families to Kenya and Ethiopia for food. The arrival each day of 1,400 to 2,000 new Somali refugees to the Dadaab Camp alone places a huge food, economic and environmental stress on eastern Kenya.

The good news for the American taxpayer is that investments by our humanitarian and development organizations have worked. Through past advances in agriculture and food security led by the United States, we learned that from the more plentiful regions of Kenya, food is flowing to the areas of greatest need. Even though tens of thousands have died in recent weeks because of the famine, I am certain that the number would have been much higher if the American people had not so smartly invested over the past decade.

Drought and famine are not new to the Horn of Africa. By examining past famines, we have learned that among the most important acute interventions is taking steps to improve health. This primacy of health is not generally recognized by the public, but it is by USAID administrator Rajiv Shah, who accompanied us.

Drought leads to famine, and famine leads to deteriorating health. Therapeutic health intervention with vaccines and oral rehydration is easy and cheap. But we have to get material to the region. And that is why the increased aid of $105 million announced Monday by our government is so important. This also shows that we can make such a difference as individuals through our own contributions (see https://www.usaid.gov/ for organizations).

The region is witnessing the worst drought in 60 years with more than 12 million people in need of outside assistance. Even though contributions by government, NGOs and the international community are growing, the needs are growing faster than the world is responding.

Americans are at their best when they respond unselfishly to others in need -- and they do so generously when they know that their investments, both personal gifts and government contributions, have value in saving lives in the short-term and supporting prevention in the long-term.

They know that their help will make a difference. Americans will act as they always do to help those in need.

The opinions expressed in this commentary are solely those of William Frist.