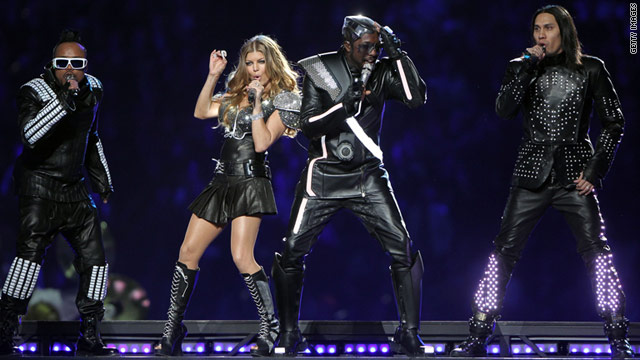 Washington (CNN) -- Politics is serious business -- but not all the time.

During Sunday's Super Bowl XLV halftime show featuring the Black Eyed Peas, singer will.i.am addressed the president in the hit song "Where Is the Love?"

"In America we need to get things straight / Obama, let's get these kids educated / Create jobs so the country stays stimulated."

Former President George W. Bush, Condi Rice and others taking in the game from their presumably heavily guarded seats.

The White House released their Super Bowl menu and it was filled with rather fatty foods.

No word yet on what first lady Michelle Obama -- an advocate of healthy foods and exercise -- had to say about the food choice.

Don't let the haters get you down

During an interview with Fox News' Bill O'Reilly before the Super Bowl, Obama was asked, "Does it disturb you that so many people hate you?"

New Orleans Saints quarterback Drew Brees thinks a political career could be in his future.

The former Super Bowl winner told Reuters, "Definitely, politics fascinates me, I find it very interesting. ... I'd consider it (running for office). I am not going to close any doors. Hopefully that's some way away, I'd love to be able to play football for as long as I can, but we'll see. There are lots of things I want to do after I stop playing."

Headline of the day

"John McCain yesterday said that President Obama has gotten easier to talk to because he's taken a more centrist position. Meanwhile, Obama said McCain's gotten a lot easier to talk to 'cause he started holding the phone right-side up" -- Jimmy Fallon

"Police in Austria are searching for a man who robs banks while wearing a Barack Obama mask. He's called the Obama robber and he successfully robbed six banks since 2008. You'd think after the third one people would start catching on" -- Chelsea Handler