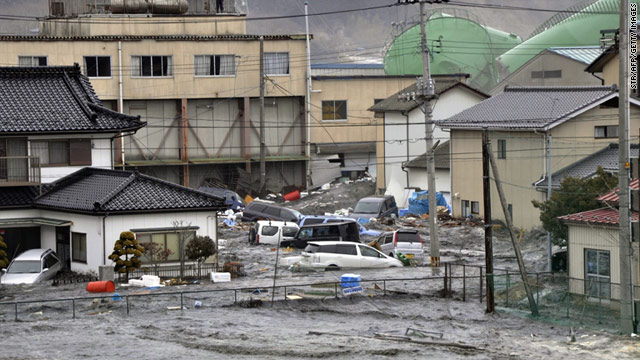 (CNN) -- Buried deep inside the GOP House of Representatives plan to trim the 2011 budget is a line item that will take $454 million away from the agency running the Pacific Tsunami Warning Center.

Yes, that's the same Pacific Tsunami Warning Center, one of two operated by a branch of the National Oceanic and Atmospheric Administration, that alerted the nation to a potentially deadly wave headed toward Hawaii and the California coast following the devastating earthquake off northern Japan last week.

House Republicans, who have been looking for ways to shave $61.5 billion from the 2011 federal budget, stress that they don't want to specifically cut either of the warning centers -- a network of ocean buoys and deep-water sensors that alert scientists to changes in ground movement and tide levels and could indicate a tsunami is on the way. They just think the parent agency has some fat to trim. The Republicans are also going after federal funding for climate change research and other environmental projects in their proposed cuts.

"Look, I think that all of us need to be tempered by the fact that we've got to stop spending money we don't have," said House Majority Leader Rep. Eric Cantor, R-Va., during a press briefing. "I mean, essentially what you're saying is, go borrow money from the Japanese so we can go and spend it there to help the Japanese."

It's the Democrats and union leaders who have been the ones most worried about the proposed cuts to NOAA's $5.5 billion 2011 budget request. The agency also runs the National Weather Service, watches out for ocean fishing, does hurricane and tornado predictions and puts up weather satellites.

The Democratic Congressional Campaign Committee has been targeting key Republican districts -- including that of Rep. Dan Lundgren, a California Republican, who voted for a round of cuts to NOAA -- in an effort to stop further reductions to the agency. They are using the recent disasters, some say unfairly, to drum up support for the Alaska and Hawaii tsunami warning centers, and NOAA's budget overall.

"Everyone knows that the government needs to cut spending, but this tsunami serves as an tragic reminder that Representative Dan Lungren and House Republicans made the wrong budget choices that can have real consequences for California families," said Jesse Ferguson of the DCCC. "Instead of cutting taxpayer subsidies for Big Oil companies, Representative Dan Lundgren voted to slash the weather service that gives us critical early warnings in times of danger, like this one."

Cantor asserts that even with the proposed cuts, the agency's budget still would be higher than it was in 2008.

"Nowhere have we indicated that we're directing NOAA not to emphasize the services it provides for the safety, health and welfare of Americans," said Cantor. "I'm told that this point was raised by some employees at NOAA, who made it known that they didn't believe the cuts were needed. Again, we all have to do more with less here."

Dan Sobien, the head of the union that represents the few dozen scientists at the tsunami warning centers as well as 4,000 federal weather forecasters and other workers nationwide, disagrees. A Facebook page, "Protect the National Weather Service," has also been launched and has nearly 48,000 members.

Sobien points to a need to invest in early warning technology that, for instance, can help increase the notice of impending tornados or spend money to revamp an overwhelmed web site that provides early weather alerts or put more weather satellites in the sky.

"[Their budget] shouldn't be cut at all. If anything, it should be increased," he said.