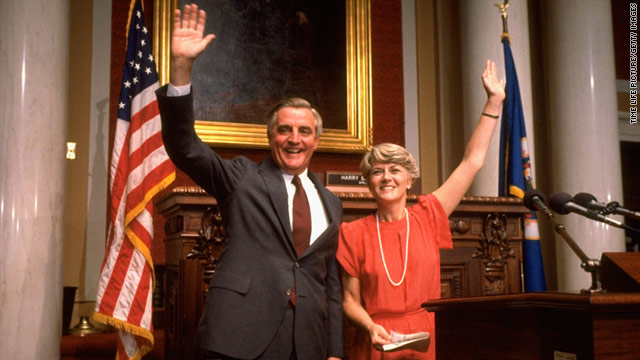 (CNN) -- Walter Mondale recalled Saturday why he chose Geraldine Ferraro to be his running mate in the 1984 presidential election.

"She was the right choice," Mondale said. "She's smart. She knows the issues. She believes in social justice."

Plus, the elder statesman told CNN Minneapolis-St. Paul affiliate KARE, she was a scrappy campaigner.

Ferraro, who trailblazed American politics for women when she became the vice presidential candidate of the Democratic Party, died Saturday, according to a family statement. She was 75.

A resident of New York City, Ferraro died in Massachusetts General Hospital, surrounded by loved ones. The cause of death was complications from multiple myeloma, a blood cancer she had battled for 12 years, according to the statement released by her family from Boston.

Ferraro was a pioneer in the man's world of White House elections when she became the first female vice presidential candidate from a major U.S. political party.

Her rise in politics was an American rags-to-riches story. The daughter of Italian immigrant parents, she lost her father at age 8, grew up in the South Bronx of New York City, worked her way through law school, became a prosecutor, ran for Congress and won, and then asked Americans to elect her as vice president.

Though she endured a harsh White House campaign and her ticket lost, she was remembered Saturday by her family and the nation's leaders for her high achievements as an indomitable and inspirational figure -- who wasn't afraid to speak her mind.

"America was changing," Mondale said of the 1980s. "The culture of our country had been very restrictive toward women, even women of great talent, by putting them in a box."

"She'll be remembered as a gutsy pioneer who stood up and fought for America to open its door to all Americans, including women," said Mondale, who served as vice president in Jimmy Carter's administration and, later, ambassador to Japan.

"Geraldine Anne Ferraro Zaccaro was widely known as a leader, a fighter for justice and a tireless advocate for those without a voice. To us, she was a wife, mother, grandmother and aunt, a woman devoted to and deeply loved by her family," her family's statement said. "Her courage and generosity of spirit throughout her life waging battles big and small, public and personal, will never be forgotten and will be sorely missed."

The family statement also described her as the "first Italian-American to run on a major party national ticket."

The Mondale-Ferraro team lost by a landslide in 1984 to Republican incumbents President Ronald Reagan and Vice President George H.W. Bush. In what became the second of Reagan's two terms in the White House, the Reagan-Bush ticket won the popular vote 58.8% to 40% and then nearly swept the electoral votes, 525 to 13.

In 1988, Bush was elected 41st president of the United States.

On Saturday, he and his wife, Barbara, issued a statement expressing "heartfelt condolences and love to Gerry's family."

"Barbara and I were deeply saddened to learn of Gerry's passing. Though we were one-time political opponents, I am happy to say Gerry and I became friends in time -- a friendship marked by respect and affection," Bush said in the statement. "I admired Gerry in many ways, not the least of which was the dignified and principled manner she blazed new trails for women in politics."

President Barack Obama also described Ferraro as "a trailblazer who broke down barriers for women, and Americans of all backgrounds and walks of life."

"Whether it was as a public school teacher, assistant district attorney, member of Congress or candidate for vice president, Geraldine fought to uphold America's founding ideals of equality, justice, and opportunity for all," Obama said in a statement.

"And as our ambassador to the U.N. Human Rights Commission, she stood up for those ideals around the world. Sasha and Malia will grow up in a more equal America because of the life Geraldine Ferraro chose to live," Obama added, referring to his two daughters.

Former President Bill Clinton and wife, U.S. Secretary of State Hillary Clinton, issued a statement saying Ferraro was "one of a kind -- tough, brilliant and never afraid to speak her mind or stand up for what she believed in -- a New York icon and a true American original."

Ferraro worked on Hillary Clinton's unsuccessful campaign for the Democratic presidential nomination in 2008. In 1994, President Clinton appointed her U.S. ambassador to the U.N. Human Rights Commission.

"Gerry Ferraro was one of a kind -- tough, brilliant, and never afraid to speak her mind or stand up for what she believed in -- a New York icon and a true American original.

"She was a champion for women and children and for the idea that there should be no limits on what every American can achieve," the Clintons said in their statement.

"She paved the way for a generation of female leaders and put the first cracks in America's political glass ceiling," the Clintons said. "For us, Gerry was above all a friend and companion. From the rough-and-tumble of political campaigns to the important work of international diplomacy, we were honored to have her by our side. She was a tireless voice for human rights and helped lead the American delegation to the landmark Fourth World Conference on Women in Beijing in 1995. Through it all, she was a loyal friend, trusted confidante and valued colleague."

"In 1984, her nomination was greeted with thunderous applause in the Moscone Center in San Francisco. The drumbeat that Geraldine Ferraro began that day in July will continue for a long time to come," Pelosi said in a statement. "As a woman and Italian American, my family and I loved her dearly and will miss her personally."

New York Gov. Andrew M. Cuomo, a Democrat, said Ferraro's accomplishments "served as a milestone in our country's acceptance of equality and diversity."

"She is proof that a person can make a difference, and make a difference is what Geraldine did throughout her life," Cuomo said in a statement. "As a role model for women across the world, she demonstrated that glass ceilings can be shattered."

In a 2005 interview with CNN, Ferraro remarked how she had come a long way from her upbringing as the daughter of working-class Italian immigrants.

"I went from being a kid who lost her father (at age 8) and who lived in the south Bronx to almost going in to live in the White House," said Ferraro, who at the time was president of the global consulting firm G&L Strategies. "That just tells you what this country is all about."

Ferraro said it wasn't just her work as a woman, but also the opportunities available in the U.S. political system, that made her experience possible.

"All these phenomenal things. I want to focus on the fact that it is not me, personally, so much as it is the campaign and the candidacy, because I do think it made a difference for this country," she said.

But during the 1984 presidential campaign, Ferraro faced harsh criticism and attacks -- both political and personal -- and remembers the different criteria she endured, a standard she feels all women entering the political arena are held to.

She was dogged by questions about her and her husband's finances and the subsequent investigation by the House Ethics Committee.

"My biggest challenge in the '84 campaign was doing the job so that I didn't let down women," she said. "In many instances because I was the first there were people looking at me and saying, 'I just hope she's able to handle it,' because if I failed, they would fail. It's a lot of pressure. It's pressure that they don't put on a man, obviously. I mean, look at Dan Quayle.

"If that had been a woman who had either made his mistakes in the campaign or during the four years of the vice presidency, it would have been a disaster," she continued. "So the pressure is really quite acute, until we get enough women doing the job. It's just a matter of getting the people in there making their voices heard."

Ferraro was born August 26, 1935 -- Women's Equality Day -- in Newburgh, New York, to restaurant owner Dominick and Antonetta (Corrieri) Ferraro. She earned a bachelor's degree in English at Marymount Manhattan College in 1956, where she studied on a scholarship. Then, while working as an elementary teacher by day, she put herself through law school at night, earning a law degree from Fordham University in 1960.

Since 1960, she had been married to real estate businessman John Zaccaro. During their 50-year marriage, they had three children, now adults.

She is also survived by her children's spouses and eight grandchildren.

In 1974, after practicing law for 13 years while raising three kids, she became an assistant district attorney in Queens, New York, where she started the Special Victims Bureau, supervising prosecution of sex crimes, child abuse, domestic violence and crimes against the elderly.

She was first elected to public office in 1978 when she became the U.S. representative for the 9th Congressional District of New York. She was re-elected in 1980 and 1982.

During her three terms in the House, she championed the Equal Rights Amendment and sponsored the Women's Economic Equity Act. Her liberal voting record frequently put her at odds with the Reagan administration.

After her bid for the vice presidency in 1984, she continued, unsuccessfully, to run for elected office -- while working in network television.

In recent years, Ferraro traveled extensively to lecture on behalf of research funding for multiple myeloma, the second most common form of blood cancer after non-Hodgkin's lymphoma, according to the Multiple MyelomaResearch Foundation. Ferraro was diagnosed with the disease in 1998 after the unsuccessful run for Senate.

Former congressman and House Speaker Newt Gingrich, a Republican, said he and Ferraro "came to Congress at the same time and I had great admiration when she was picked to be the first woman vice presidential candidate for a major party."

"She worked with us at the Center for Health Transformation, focused largely on FDA reform and on helping with cancer, because she personally knew how important it was to have new medicines, which had saved her life for a decade," Gingrich said in a statement. He founded the center, which is a collaboration of private- and public-sector leaders committed to improving the health system.

In the 2005 interview, Ferraro expressed disappointment that no women had been named to a major party ticket for the presidential nomination since 1984, but she expressed hope that would change in the near future.

"I believe that in 2008, we are going to see a woman and perhaps women running for their party's nomination," she said in 2005. "I expect that we will see Hillary Clinton on (the Democratic) side and (Texas) Sen. Kay Bailey Hutchisonrunning for the Republican nomination in 2008, and both of them will have established their bona fides in the United States Senate."

But in March 2008, Ferraro was at the center of political controversy when she resigned from her fundraising position with Clinton's campaign for comments Ferraro made about Clinton's rival, then-Sen. Obama of Illinois, during the Democratic primaries.

Ferraro remarked that Obama's campaign was successful because he was black.

She later told CNN that she was "absolutely not" sorry for her comments.

"I am who I am and I will continue to speak up," she said.

Ferraro then criticized the Obama campaign for efforts she characterized as trying to block her First Amendment rights. Obama went on to win the presidency in 2008.

Ferraro is also the author of three books: "Ferraro: My Story," "Changing History: Writings on Current Affairs," and "Framing a Life: A Family Memoir."