Trump has a long history of assisting Democrats 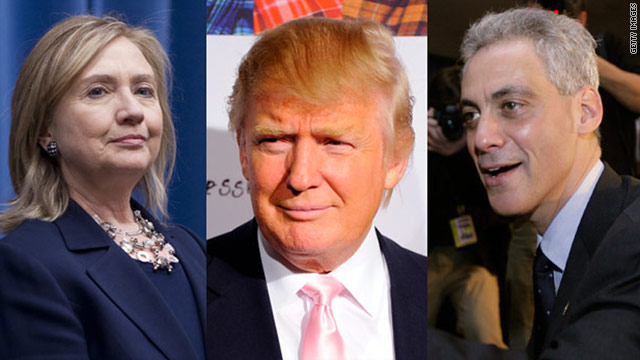 Donald Trump gave money to Hillary Clinton when she was a senator and to Rahm Emanuel's Chicago mayoral campaign.
STORY HIGHLIGHTS

Washington (CNN) -- When it comes to political contributions, Donald Trump has no problem spreading the wealth around.

While the real estate titan and television star professes to be serious about seeking the Republican presidential nomination in 2012, his long history of steering money to Democratic candidates has largely escaped notice amid the headline-grabbing din of birth certificate talk and his surprisingly high poll numbers.

For the record, Trump has given $541,650 to federal Democratic candidates and fundraising committees going back to 1990, according to data from the Center for Responsive Politics. That compares with $429,450 he's contributed to federal Republican candidates and committees over the same period.

Trump: 'Our leader is incompetent'

Trump made in China

Trump: 'I have done a great service'
RELATED TOPICS

Nevertheless, Trump the Republican made a splash Wednesday during a daylong tour of the first-in-the-nation primary state of New Hampshire.

Arriving in a helicopter and riding in a limousine with an entourage of well-suited aides in tow, Trump spent the day meeting with conservative activists and taking credit for the surprise release of President Obama's long-form birth certificate.

But the morning after the media frenzy, one leading conservative figure, Kentucky Sen. Rand Paul, sought to remind Granite State Republicans of how generous Trump has been with his pocketbook.

"I've come to New Hampshire today because I'm very concerned," Paul joked at a GOP breakfast in Merrimack County on Thursday, according to The New York Times. "I want to see the original long-form certificate of Donald Trump's Republican registration."

Paul, who was visiting the state to lay some early groundwork for a possible 2016 presidential bid, ribbed Trump for giving money to a pair of high-profile Democrats: Senate Majority Leader Harry Reid and New York Rep. Charlie Rangel.

"I'm going to believe it when I see his embossed seal to his Republican registration," Paul said.

Michael Cohen, an adviser to Trump, tried to explain the thinking behind his boss's political donations during a March visit to Iowa, which holds the first contest in the president nominating process.

His answer: "Mr. Trump gives money to everybody."

"It's irrelevant as to whether or not it's Republican or Democrat," Cohen added. "He is an individual who looks to individuals and not the party. There are many business deals he does that that requires."

Cohen said Trump contributed to Emanuel's campaign after being asked to do so by his agent, Ari Emanuel, Rahm's brother.

Trump stepped up his support for conservative candidates during the 2010 midterms, giving $50,000 to the Karl Rove-affiliated 527 group American Crossroads, $30,400 to the Republican Senatorial Campaign Committee, $3,500 to Nikki Haley's gubernatorial campaign in South Carolina and $1,000 to Oklahoma Sen. Tom Coburn.

But as Republicans and Tea Party activists nationwide were working to take back the House and Senate in 2010, Trump was also handing out checks to top Democratic incumbents: $4,800 to Reid, $2,000 to Florida Sen. Bill Nelson and more than $8,000 total to New York's two senators, Charles Schumer and Kirsten Gillibrand.

The biggest recipient of Trump's largesse? The scandal-plagued Rangel, who has taken $24,750 from Trump since the 1990 election cycle.

The Center for Responsive Politics found that of the 96 federal candidates Trump has supported since 1990, only half were Republicans.

One of those GOP donations is certain to bother the very conservatives he is trying to court: Trump found himself on the wrong side of a high-profile Republican civil war in Florida in 2010, giving $4,800 to Charlie Crist during his ill-fated Senate primary campaign against conservative darling Marco Rubio.