'Deathers' take over where 'birthers' left off 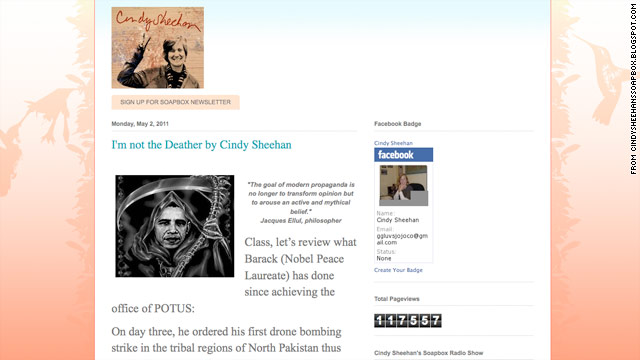 "Osama bin Laden and al Qaida were constructs of the CIA," Cindy Sheehan writes on her blog.
STORY HIGHLIGHTS

The release of President Obama's birth certificate last week apparently tamped down -- to a large degree -- skeptics who questioned whether he could legally serve as president because they said he wasn't a natural-born citizen. Now, a surprisingly diverse crop of people are questioning whether Osama bin Laden is actually dead.

Some media outlets and bloggers are calling them "deathers."

Their claims follow a wide range: Some believe that the world's most-wanted terrorist was not the man killed Sunday, others think bin Laden is dead but was killed many years ago, and still others believe that the September 11 mastermind is alive -- and secretly being interrogated.

One Fox Business Network host is not going quite that far. Judge Andrew Napolitano at one point declared that "Osama bin Laden is dead," but he later seemed unconvinced. Napolitano also questioned the president's authority to kill him.

Napolitano began his Monday show by saying bin Laden was "killed on the illegal whim of the president." Moments later, he added, "Osama bin Laden is dead. And the president seems to think he has the right to kill whomever he wants so long as the person is perceived as a monster and the public supports it."

And yet the judge also questioned whether officials are "telling us the truth or pulling a fast one to save Obama's lousy presidency." Later in the broadcast, Napolitano asked a guest, "Do you believe he's dead, or do you want some more evidence: a photograph, a testimony of an eyewitness? Something other than the words of a president whose words we have doubted before?"

Others who are questioning bin Laden's death include a libertarian talk radio host, a well-known liberal anti-war activist and some everyday Pakistani students.

What their claims all have in common -- much like claims that the president was born outside the U.S., instead of in Hawaii -- is that they go against the agreed-upon facts.

Obama's decision not to release the photos of bin Laden's death seems to be stoking "deather" fires.

Saltz: No evidence can convince doubters

Alex Jones is a Texas-based talk radio host who also runs various websites and whose YouTube channel claims more than 24 million views. He is sometimes called a right-wing conspiracy theorist.

After the president's announcement of bin Laden's death, Jones told his listeners in one broadcast, "My friends, this is a complete and total hoax."

"Where is the body?" Jones asked in another show. "My White House sources nine years ago, on record, confirmed that he had been killed and was frozen on ice."

Cindy Sheehan, who is certainly not an ideological ally of Jones', appears to agree with him on bin Laden's death.

Sheehan became famous for protesting President George W. Bush's Iraq policy -- even camping out at the White House and the president's Crawford, Texas, ranch -- after her son was killed in the war.

Shortly after the president's bin Laden announcement, Sheehan planted seeds of doubt on her Facebook page and blog.

"The only proof of Osama being dead again that we were offered was Obama telling us that there was a DNA match between the man killed by the Navy SEALs and OBL. Even if it is possible to get DNA done so quickly, and the regime did have bin Laden DNA lying around a lab somewhere -- where is the empirical proof?" Sheehan continued.

Meanwhile, a Facebook page -- named "Osama Bin Laden Not Dead" -- has been created as a sort of message board for theories.

"This whole story is a distraction from Obama's birth certificate bollox," Kevin Lane posted. "That was all over the news until in the space of 24 hours he had found OBL, killed (but not captured) him, done DNA tests and got the results (dont that take 3 days) and dumped his body at sea. Surely if OBL was/is such a bad man they would want the world to see him dead whether the pics are gruesome or not."

"Bin Laden was taken alive and is being interrogated some where before being executed," David Colin Leach posted.

Shortly after the announcement of bin Laden's death, university students in Abbottabad, Pakistan, where he was killed, expressed skepticism.

"That's propaganda," one student told CNN's Nick Paton Walsh. "Osama has been killed 10 years ago in Afghanistan. And it's just a propaganda to finish the war in Afghanistan." Others refused to believe that bin Laden was even in Abbottabad. And others echoed calls for the Obama administration to show pictures.

"If it is true, then why are they not showing his body?" one student asked.

One expert on conspiracy theories said that such wide, diverse claims have one common element: They often come from the political "fright wing."

"Your conspiracy theories tend to proliferate on the extreme edges of the political spectrum," said John Avlon, a CNN contributor and author of "Wingnuts: How the Lunatic Fringe is Hijacking America."

"Unfortunately, you're going to have people who -- especially in today's politics and especially with the amplification that the Internet provides -- will embrace conspiracy theories on almost anything."

And Avlon said such people often share a common trait.

"They come up with these ornate explanations, alternate explanations, for how events occur, like JFK's assassination, in order to keep their own psychology in place. 'Nineteen guys could not have brought down the twin towers. It had to be a government conspiracy,' they say to themselves. Otherwise, the world becomes really scary and unpredictable and unstable for them."

"While it's entirely predictable that certain Osama bin Laden conspiracy theories would proliferate in the Middle East, because of some people who have a creative interest in those rumors ... the fact that such (bin Laden) conspiracy theories are anywhere in the American political spectrum is a little surprising and a lot pathetic," Avlon added.