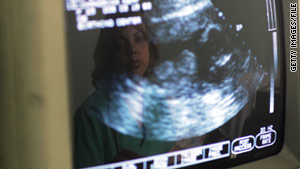 A Texas abortion law, effective September 1, will require women to undergo an ultrasound before obtaining an abortion.
STORY HIGHLIGHTS

(CNN) -- Women seeking an abortion in Texas will have to view a picture of the embryo or fetus and hear a description of its development before having the procedure, under a law that takes effect September 1.

The bill stirred some controversy in Texas, but it easily passed through the state House and Senate, both of which are controlled by Republicans. It was signed into law Thursday by Republican Gov. Rick Perry.

The law says that at least 24 hours before an abortion is performed, women must undergo a sonogram, a procedure that uses ultrasound to create an image.

The doctor, then, is required to give, "in a manner understandable to a layperson, a verbal explanation of the results of the sonogram images, including a medical description of the dimensions of the embryo or fetus, the presence of cardiac activity, and the presence of external members and internal organs," the law states.

There are some exceptions, including pregnancies that resulted from sexual assault, incest or other violations of law.

Women seeking abortions also are exempt if the fetus has been found to have an irreversible medical condition that will cause a disability.

"Governor Perry was pleased to sign this important legislation, which bolsters our efforts to protect life by ensuring Texans are fully informed when considering such an important decision," said his deputy press secretary, Lucy Nashed.

"What no one is focusing on is that this is a mandate to humiliate women who want an abortion," said Yvonne Gutierrez, vice president for public affairs at the Planned Parenthood Trust of South Texas.

Texas already requires a 24-hour consent period, and the new law will simply add emotional and financial costs to those seeking abortions, she said.

"It's going to make it more difficult for women to get an abortion," Gutierrez said, calling it the most stringent sonogram law in the country.

In addition, Gutierrez said, there is the fear that the added requirements on doctors could make them averse to providing the procedure for fear of legal action that could lead to revocation of their licenses.

But Elizabeth Graham, director of Texas Right to Life, said, "As long as they are following the law, they have nothing to worry about."

The law, she says, "will strengthen informed consent and bring abortion closer to standards that are set for other surgical procedures."

If anything, requiring a sonogram is simply like requiring an X-ray before a surgical procedure, Graham said.

"The sonogram law is an enormous step forward toward protecting women's health in Texas," she said.