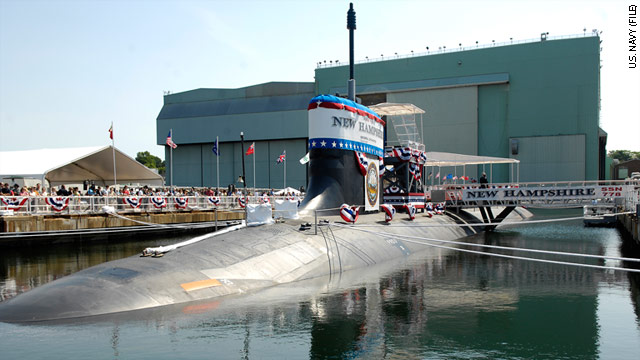 The USS New Hampshire was built at a Groton, Connecticut, facility that could benefit from a fund set aside by Congress.
STORY HIGHLIGHTS

Washington (CNN) -- The defense bill that just passed the House of Representatives includes a back-door fund that lets individual members of Congress funnel millions of dollars into projects of their choosing.

This is happening despite a congressional ban on earmarks -- special, discretionary spending that has funded Congress' pet projects back home in years past, but now has fallen out of favor among budget-conscious deficit hawks.

Under the cloak of a mysteriously-named "Mission Force Enhancement Transfer Fund," Congress has been squirreling away money -- like $9 million for "future undersea capabilities development," $19 million for "Navy ship preliminary design and feasibility studies," and more than $30 million for a "corrosion prevention program."

So in a year dominated by demands for spending cuts, where did all the money come from?

Roughly $1 billion was quietly transferred from projects listed in the president's defense budget and placed into the "transfer fund." This fund, which wasn't in previous year's defense budgets (when earmarks were permitted), served as a piggy bank from which committee members were able to take money to cover the cost of programs introduced by their amendments.

And take they did.

More than $600 million went to a wide number of projects, many of which appear to directly benefit some congressional districts over others.

For example, that $9 million for "future undersea capabilities development" was requested by Rep. Joe Courtney, D-Connecticut, whose district happens to be home to General Dynamics Electric Boat, a major supplier of submarines and other technologies to the U.S. Navy.

And the $19 million for "Navy ship preliminary design and feasibility studies"? Rep. Steve Palazzo, R-Mississippi, asked for that. His district's largest employer is Ingalls Shipbuilding -- a major producer of surface combat ships for the Navy.

Nothing in these expenditures appears to be illegal, but critics say they still may violate the spirit, if not the language, of the earmark ban.

"These amendments may very likely duck the House's specific definition of what constitutes an earmark, but that doesn't mean they aren't pork," says Leslie Paige of Citizens Against Government Waste, a government-spending watchdog group. The group believes if modification of the National Defense Authorization Act generated savings, that money should have been put toward paying down the deficit.

In their defense, supporters say the amendments offered by various members may very well represent good governance. The $30 million Rep. Betty Sutton, D-Ohio, set aside for corrosion prevention could go far to help tackle the Defense Department's corrosion problem, estimated to cost the military more than $15 billion a year.

However, there are two things worth considering: Sutton's request comes on top of the $10 million already included in the bill for corrosion related programs, and Sutton's district is home to The University of Akron, which created the country's first bachelor's degree program for corrosive engineering in 2008.

Then, on May 9, two days before the defense bill mark-up, it was announced that the Defense Department had given the University of Akron $11 million to build its new "National Center for Education and Research in Corrosion and Materials Performance."

Sutton was the biggest supporter of that new spending.