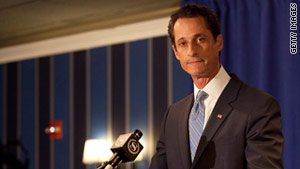 U.S. Rep. Anthony Weiner admitted Monday that he sent revealing pictures of himself to women over the Internet.

Washington (CNN) -- Democratic leaders in Congress turned their backs Tuesday on embattled Rep. Anthony Weiner a day after the New York Democrat admitted to improper sexually-tinged communications with women and lying about it.

"I wish there was some way I could defend him, but I can't," Senate Majority Leader Harry Reid, D-Nevada, told reporters. Asked what he would say if Weiner sought advice, Reid smiled and responded: "I'd tell him to call someone else."

House Minority Leader Nancy Pelosi, D-California, who called for an ethics investigation Monday, released a letter Tuesday that detailed her formal request for the inquiry. Weiner publicly apologized Monday for sending flirtatious messages on Facebook and Twitter with six women over the past three years and then denying it for a week.

Weiner has said he would "welcome and fully cooperate" with the probe. However, a senior Democratic aide said Pelosi's letter was not required, and her releasing it was more of a political move.

"This certainly adds pressure for him to go," said the senior Democratic aide, who spoke on condition of not being identified.

The public disrespect by his own party leaders bodes poorly for Weiner in the aftermath of a scandal that first surfaced over the Memorial Day weekend. Weiner said Tuesday he would not step down, but that didn't stop House Majority Leader Eric Cantor, R-Virginia, from calling for his resignation.

Cantor told reporters that with all the challenges facing the country, "the last thing we need is to be immersed in discussion about Congressman Weiner and his Twitter activities," according to Cantor spokesman Brad Dayspring.

Asked if Weiner should resign, Cantor said that was up to the congressman and his constituents, but added: "I certainly don't condone his activity and I think he should resign," according to Dayspring.

Democrats are furious with Rep. Weiner

Weiner: 'I'm not resigning, no'

An ally from the Republican side of the aisle, Rep. Jason Chaffetz of Utah, said Weiner will "have to look at himself to make that decision," but that Weiner's trustworthiness is spent.

Asked by CNN's Elliot Spitzer Tuesday on "In the Arena" what advice he would have for Weiner, as a friend, Chaffetz replied: "I don't see any option but to step down."

Chaffetz elaborated: "I like the guy. I've gotten along with him. I've sponsored bills with him, I've done fun things on television and what not with him. But there comes a point where you just have to say, 'I'm sorry, but there is also some consequence to this.' This is about the trust that he has -- with the American people and specifically the people in New York, but I just don't see how you can go on from this."

Pelosi's letter to the top Republican and Democrat on the House ethics panel noted that Weiner had "disclosed conduct which he described as inappropriate."

"An investigation by the Ethics Committee to determine whether the Rules of the House of Representatives have been violated is warranted," Pelosi said in the letter.

As pressure built for some indication about the Ethics Committee's intentions, the panel's Republican chairman and ranking Democratic member issued a statement Tuesday night underscoring -- without mentioning Weiner -- their duty to impartiality and confidentiality:

"If and when an investigation is appropriate in any matter, the Committee will carry out its responsibilities pursuant to our rules and with the utmost integrity and fairness," said the statement from Reps. Jo Bonner, R-Alabama, and Linda Sanchez, D-California. "Pursuant to our rules of confidentiality, we will not have any further comment at this time."

The code of conduct for members of Congress calls for them to conduct themselves "at all times in a manner that shall reflect creditably on the House." Ethics experts say legislators are rarely if ever disciplined for violating that rule alone.

Using government technology such as telephones and computers for his sexting could be another story.

Weiner said Monday he used his personal BlackBerry and home computer, but added: "I don't have the knowledge of every last communication, but I don't believe that I used any government resources."

Even if he did, that doesn't automatically subject him to House discipline, said Stan Brand, a former House general counsel who has represented legislators before the ethics panel.

Members of Congress sometimes use official resources for nongovernment activities, Brand noted, adding that "the House has never taken a position or disciplined someone for that use."

Back in New York, those who will likely decide Weiner's political future debated whether the scandal will be his downfall. Some voters in Weiner's district said he should "never resign," while others called for his immediate ouster.

While Weiner -- first elected to Congress in 1998 -- has generally enjoyed strong backing in New York's 9th District, his confession Monday raised doubts about the man voted to Washington in seven straight elections.

Eva Slomobits, 82, a lifelong Democrat who campaigned for Weiner, said now, "I definitely won't vote for him, I think of him as a different person."

"He betrayed his wife," Slomobits added. "You have to think before you make a mistake."

Others took the opposite position.

"Actually, I'm glad he's not resigning," Patrick Riley said. "What he does on his personal time is his business."

Jenny McCourt, a registered Republican who has lived in the district 40 years, said Weiner should "definitely not" resign.

"I think he's one of the most effective, decent congressman out there," said Brooklyn native Richard Elliott. Weiner's behavior was "stupid," Elliott said, but not something to resign over.

He also said, "I find it ridiculous that that would be the news" when so much else is going on in the world.

If Weiner were to resign or be compelled to leave office, New York Gov. Andrew Cuomo, also a Democrat, would determine the timing of a special election to replace him.

Whether or not he holds onto his congressional seat, many analysts believe he will pay a tremendous political price: losing his spot as a front-runner in New York's 2013 mayoral election.

New York Mayor Michael Bloomberg said Tuesday that the blanket media coverage of what some call Weinergate means voters are fully aware of what happened.

"They will have an opportunity to express themselves in one year and four months from now," Bloomberg said. "In the meantime, you know, I keep saying, this country has lots of very big problems that maybe we should all focus on and Congress should certainly get back to work and focus on."

Republicans have jumped on the situation, targeting Democrats who have accepted financial donations from Weiner over the years.

The news releases don't suggest Weiner collected money inappropriately, but they refer to him as "ethically troubled" and call on the lawmakers to return his money and "condemn Weiner's outrageous behavior."

By Tuesday afternoon, two House Democrats from competitive districts announced they were donating campaign contributions from Weiner to charity.

A spokesman for Rep. Betty Sutton, D-Ohio, said she will make a $1,000 donation to local charities instead of keeping the campaign contribution from Weiner.

Minnesota Democratic Rep. Tim Walz also decided to give to charity the $3,000 he received from Weiner.

Weiner's admission Monday came a week after he claimed a hacker had posted a lewd photo to his Twitter account. Speaking at a news conference Monday, Weiner said he had carried on inappropriate relationships with several women he had met online.

Weiner said he is not planning on separating from his wife, Huma Abedin, a longtime aide to Secretary of State Hillary Clinton.

He said he took "full responsibility" for his actions -- both the relationships and for lying about sending the photo last month of his bulging underwear on his Twitter account.

"I'm deeply sorry for the pain this has caused my wife, and our family, my constituents, my friends, my supporters and my staff," he said, claiming he meant to send the photo as a direct message -- which is private -- as a "joke" and then "panicked" after he realized he had tweeted it, which anyone can see.

"I lied because I was ashamed at what I had done, and I didn't want to get caught," he said.

An emotional Weiner described his actions as "dumb," "destructive" and "deeply, deeply hurtful" -- both for his admitted cover-up and for repeatedly engaging in "inappropriate conversations conducted over Twitter, Facebook, e-mail and occasionally on the phone" with women he'd met online, mostly via Facebook.

The congressman claimed that he never met any of the women in person, and that his wife learned he'd been lying about the Twitter picture on Monday morning.

The admission came hours after more images were published on BigGovernment.com, a conservative website run by Andrew Breitbart, that apparently show Weiner shirtless.

Weiner initially released written statements claiming that he was the victim of a hacker and a prank. Then, during a testy press conference, he dodged questions about whether the photo was of him and why he hadn't asked law enforcement to investigate if his account had been compromised.

He later told a series of interviewers he could not say with "certitude" if the underwear photograph was of him. He also said he had hired an attorney at the firm of Baker Hostetler to look into the matter.

The woman who received the Twitter photo in late May, Gennette Cordova, denied on her own account that she was one of the women with whom Weiner admitted having an "inappropriate relationship."

ABC News reports that Meagan Broussard, a 26-year-old single mother from Texas, provided them with dozens of photos, e-mails, Facebook messages and cell phone call logs related to her online relationship with Weiner.

In a posting on BigGovernment.com, Broussard said she was a U.S. Army veteran and full-time college student who, on April 20, went to Weiner's Facebook page and commented that the congressman was "hot" on one of his videos.

She said the two began corresponding "within an hour," adding that she didn't know if he is a "horrible person" but decided to speak out after hearing he'd "hired an investigative firm to go through all of his files."

Many Democrats first rallied around the liberal congressman. But as the questions persisted and Weiner's response became more unconvincing, some began to call for him to come clean.