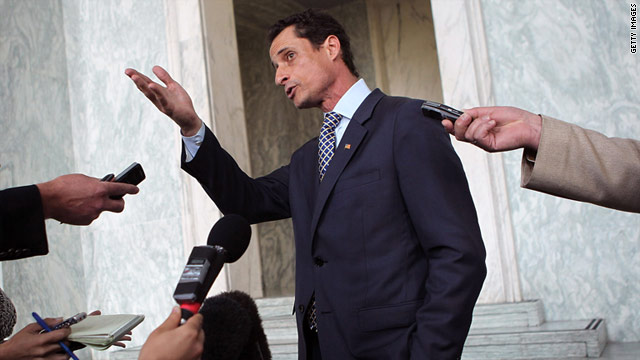 Rep. Anthony Weiner, D-New York, speaks to the media regarding a lewd photo tweet May 31 on Capitol Hill.
STORY HIGHLIGHTS

Washington (CNN) -- Before Rep. Anthony Weiner's Twitter scandal broke, he was best known for a passionate, theatrical rant on the House floor over a bill that funded health care costs for 9/11 first responders.

He might have been better remembered as the mayor of New York if the experts who considered him the front-runner for next year's election were right.

Now his legacy is as the first congressman to be toppled in a tawdry "sexting" scandal. He resigned on Thursday, 10 days after admitting he sent lewd photos of himself to women he befriended on Facebook and Twitter, as well as having lied about it when the photos and accusations became public.

Weiner is not the first politician to be slimed by a sex scandal. A few survived, but most didn't.

And he's not even the first to be brought down online -- that distinction goes to former Rep. Christopher Lee, R-New York, a married father who resigned earlier this year after he sent a shirtless picture of himself to a woman he met on Craigslist.

Weiner, 46, was first elected to the House in 1998 after his political mentor, then-Rep. Chuck Schumer, decided to run for the Senate. He has been a reliable liberal voice for the solidly Democratic 9th District, which encompasses parts of Brooklyn and Queens.

Read what Weiner's constituents are saying

Weiner basically ran unopposed in 2006 and 2008 and won by 22 points over his Republican opponent last year, easily avoiding the GOP tidal wave that swept over the House.

When the James Zadroga 9/11 Health and Compensation Act was hung up in the House last year, Weiner tore into Republicans who opposed the bill over what they said were procedural concerns, including Republican Rep. Peter King, a fellow New Yorker.

"It's Republicans wrapping their arms around Republicans rather than doing the right thing on behalf of the heroes," Weiner screamed. "It is a shame. A shame! If you believe this is a bad idea to provide health care, then vote no! But don't give me the cowardly view that 'Oh if it was a different procedure...'"

When King tried to interrupt him, Weiner aimed at King.

Critics say Weiner's rant was aimed at elevating his stature in New York politics rather than in Congress.

Will the public forgive Weiner?

Salon's Steve Kornacki wrote that it was tempting to cheer for Weiner's theatrics, "until you realize that all he's doing is pursuing a very shrewd media strategy designed to position himself for future advancement."

Kornacki contrasted Weiner's rant on the 9/11 "heroes" against his silence on the Islamic community center near ground zero that opponents derided as the "ground zero mosque."

Kornacki also pointed out that even though the real workhorses behind the 9/11 bill were fellow Democratic Reps. Carolyn Maloney and Jerrold Nadler, Weiner's rant got most of the attention.

Errol Louis, a CNN contributor who hosts a television and radio show in New York and is a former New York Daily News columnist, said that's why Weiner's fellow Democrats aren't rushing to his defense.

"We have not heard from any of them," Louis said. "And there was always this underlying problem where Anthony Weiner was considered a show horse rather than a work horse. We see him on cable TV all the time, but that's not really where a lot of work gets done in the district. There are a lot of meetings. There's a lot of hard work that gets done.

"So, there's a certain amount of satisfaction from some of his colleagues, frankly, saying like, 'Look, the guy got what was coming to him.' "

Read more on the story

Weiner had vowed that he wouldn't resign, and said he hoped to save his marriage to Huma Abedin, a longtime aide to Hillary Clinton in the White House, Senate and now in the State Department.

Weiner fully embraced social media sites such as Twitter and Facebook -- and used the platforms to unleash his comedic take on life and politics.

In a June 1 tweet on his profile @RepWeiner, he wrote: On with Rachel (Maddow) tonight. Gonna talk about Trump eating pizza with a fork! #DudeYoureANewYorker!

Or his May 27 tweet saying "my tivo ate the hockey game! #WhoCanISue?"

Weiner attended the State University of New York Plattsburgh. He was rumored to have been pursuing a career as a TV weatherman. That simply was not in the forecast.

Soon after he worked as an aide to Schumer from 1985 to 1991. A year later he served on the New York City Council.

Throughout his time in office, Weiner has found himself drawn back to the city he calls home. He ran unsuccessfully in the Democratic mayoral primary race in 2005 and was mentioned as a candidate for 2013. But most observers now feel the scandal has ruined any chance of that.

"He was arguably the front-runner. He'd raised more money than anybody else," Louis said. "That is completely out of reach now because the mayor of New York City now runs the school system for about the last nine years or so, and people, you know, parents are not going to look away at something like this."

Despite calls to resign, Weiner had said he would let his constituents decide on whether he should return for an eighth term.

A recent poll found that a majority of his constituents wanted him to remain in office.

And their opinions -- given before Thursday's announcement -- were mixed on whether they want him to remain in office.

"It's scary that, you know, a political person that we elected would be able to do something like that," said Ally Nekta, a voter in the 9th District.

Patrick Riley, meanwhile, stood by him. "What he does on his personal time is his business," he said.