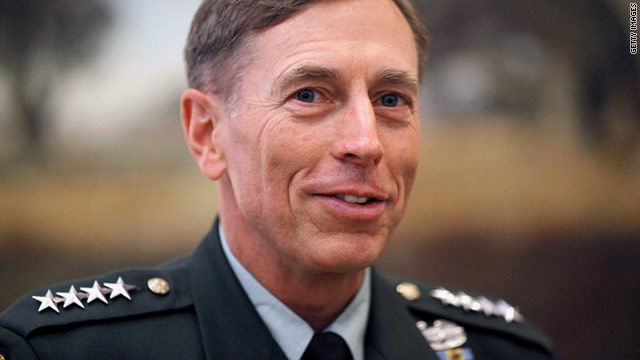 The 58-year-old commanding general of U.S. forces in Afghanistan has said he will retire from the military before assuming his new post later this year. For now, he will continue overseeing the Afghanistan mission during the first phase of troop withdrawals beginning next month.

Petraeus received strong support at his confirmation hearing by the Senate Intelligence Committee. He told the panel he would lead the nation's largest intelligence agency fully independent of his ties to the military.

Petraeus assumed command of the NATO International Security Assistance Force and U.S. Forces Afghanistan on July 4, 2010, after serving for more than 20 months as commander of United States Central Command. He previously commanded multinational forces in Iraq, leading the so-called "surge."

During his time commanding the U.S. Army Combined Arms Center and Fort Leavenworth, he oversaw the development of the Army/Marine Corps Counterinsurgency Manual, and his experience in working with the CIA on counterinsurgency efforts in the field was cited as a reason for his nomination by President Barack Obama to succeed Panetta, who will take over as defense secretary Friday from the retiring Robert Gates.

In a statement Thursday, Panetta said he looked forward to working with his successor.

"As tough as it is to leave the director's office at CIA, it's made easier knowing that my successor will be someone as supremely talented and capable as Gen. David Petraeus," Panetta's statement said. "Just as Bob Gates and I had a close and effective working relationship, I look forward to having the same kind of ties with Dave. Together, we'll ensure that the critical partnership between the CIA and our war-fighters continues to advance America's values in the world and keep our nation safe."

At his confirmation hearing, Petraeus acknowledged that Director of National Intelligence James Clapper is the "leader of the intelligence community," and that the CIA plays a major role in U.S. intelligence gathering, but is part of a larger team.

He assured the committee that under his leadership, the CIA would be "relentless" in pursuing intelligence needed by the government, and said that serving as director of dedicated CIA personnel "would be a tremendous honor and a tremendous privilege."

Asked about enhanced interrogation techniques widely considered to be torture, Petraeus reiterated his past opposition to them, saying methods permitted in the military interrogation manual he helped oversee have proven effective.

However, Petraeus said enhanced techniques could be considered in a so-called "ticking bomb" scenario -- such as questioning someone who planted a nuclear device in New York set to go off in 30 minutes.

"I do think there is a need at the very least to address the possibility," Petraeus said of such a scenario. He called for discussing and working out a process ahead of time that would enable authorization from top leadership in order to prevent lower-level officials from being forced to consider the matter while "reacting under extreme pressure."