In Seoul, a virtual grocery store in the subway 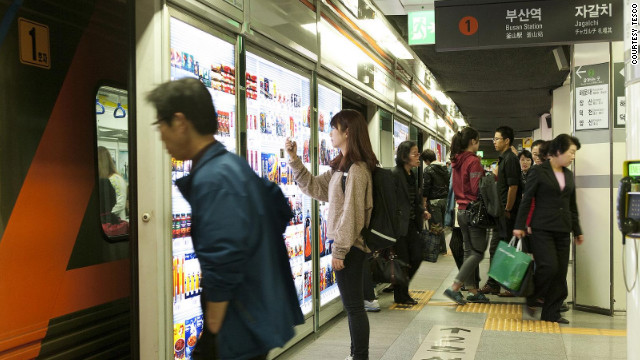 (CNN) --- Phones do everything in South Korea.
On a recent reporting trip to the country, I made a point of asking people about interesting ways they use their smartphones.
Some answers weren't too shocking. Lots of people know Koreans use their phones to make purchases (that's a new-ish idea here in the U.S., and one that Google is pushing) and in place of public-transit tickets.
Cab drivers in Seoul give you weird looks if you try to pay with a credit card instead of with a tap of your phone.
Read More
But one answer surprised me:
People now use their phones to buy groceries in the subway.
Over the past five months, Tesco, the British chain, has been opening virtual grocery stores in subway stations and bus stops in Seoul. Commuters use their smartphones to scan and purchase these virtual items, which are delivered to their homes.
"It’s really captured people's imaginations, which is something that’s really magical in retail," said Roberto Munoz, a spokesman for the company, which goes by the name Homeplus in Korea. "It has people thinking outside of the box about how they can purchase things -- and the convenience with which they can purchase things."
The subway station walls look just like the shelves of a typical grocery store -- only the items are just photographs and each is tagged with a QR Code (those black-and-white checkered things). Shoppers launch a Homeplus app and then scan the QR Codes of the items they'd like to purchase. Money is automatically deducted from the bank account of their choice, and the groceries are delivered to the address they've saved into the system. If you order by 1 p.m., the items arrive that very day.
(If that sounds confusing, you can check out this promotional video to see it in action).
There's plenty of undeserved hype surrounding QR Codes, as Amy Gahran recently pointed out, but this seems like an interesting implementation for a couple of reasons. First,  commuters are always wasting time by pecking on their phones while waiting for a train. These virtual stores could make that time more productive. And second, the fact that you can see life-sized photos of the grocery items, I would guess, makes people more likely to buy them. I'm the kind of person who never remembers he's out of milk until he sees milk somewhere. So the virtual store acts as a kind of reminder.
Munoz said the stores are just in the pilot phase for now, with locations in two subway stations and 20 bus stops, all in Seoul. One subway store features about 500 products, he said. A typical bus stop might showcase only 50.
The company isn't sure whether the concept would work outside Korea, but you never know.
"It’s an interesting way for us to be able to put a store nearly anywhere," Munoz said.
© 2021 Cable News Network, Inc. A Time Warner Company. All Rights Reserved.
CNN Sans ™ & © 2016 Cable News Network.