'Journey' and the rewards of contemplative gaming 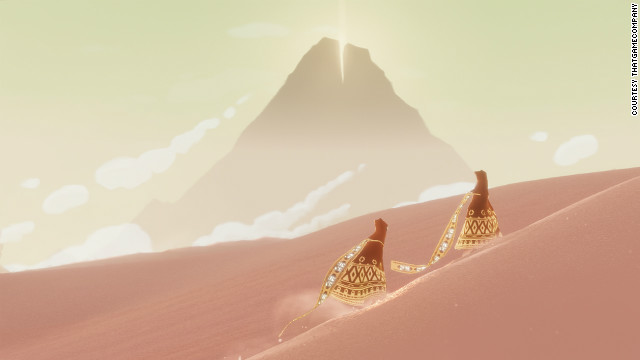 A scene from "Journey."

When it comes to the words "video games," most people think about a fast-paced, action-oriented setting, possibly with lots of shooting and maybe even some splashes of blood for good measure. But gamers don't only crave that type of experience -- in fact, both gamers and critics alike give rave reviews to titles that cultivate intellectual and even spiritual gaming leanings.

March 13 marks the official launch of the fourth game from indie studio thatgamecompany, known for their interesting and beautiful titles that defy conventional standards. Called "Journey," this "interactive parable to experience a person's life passage," as it is described on the official website, places the player in the role of a silent robed figure standing alone in a sea of glimmering sand dunes.
In the distance, a great mountain is silhouetted against the sky with a glow of light at the peak. Your destination is to reach that place, and learn what it may contain. The metaphor is clear: This is our life journey, and we will walk it to pursue whatever may lie at its end.
Unlike most current games, "Journey" is a very pared down, simplistic experience. In fact, the game only contains one word of text: The opening title. Beyond that, there is no dialogue, only the sound of your character's feet slicing through the sand as it presses forward. From start to finish, everything about this mysterious and beautiful experience is entirely open to interpretation, and the overall feeling of playing is one of serenity and peace.
While "Journey" is not the first game to take an approach that allows a player to explore their own universe without hand-holding or overt definition, it is one on a road less traveled. Cyan's tremendously popular adventure series"Myst" was renowned for its atmospheric environment and music. Japanese video game development studio Team Ico is also known for their vast landscapes and spiritual overtones in games such as "Ico" and "Shadow of the Colossus." And the recently released iPhone/iPad title "Superbrothers: Sword & Sworcery" also wowed fans with a contemplative soundtrack and a mysterious, unexplained universe.
Read More
Indie game designer Jason Rohrer also shook up the gaming world in 2007 with a simple title called "Passage" that simply walked the player from birth to death, exploring the entire human lifespan in a five minute exercise.
So what is this new focus on "zen gaming" all about? Do gamers just want something chill to play as a break from the high-paced action of titles like "Halo" and "Call of Duty," or is there something more behind it?
"I think the quality we are after in 'Journey' and similar games is not zen or relaxation or even peacefulness, really, but something like interactive contemplation, or contemplative gaming," says Timothy J. Welsh, assistant professor of digital humanities at Loyola University. "I realize that is a term that also gets associated with zen, mediation, and mystic spirituality, but I'm thinking of it more in the sense of how one regards a landscape painting."
"We wouldn't say an art exhibition is aimed at promoting relaxation, centeredness, peacefulness, or zen. Instead, when we stand before the stillness of a landscape by Courbet -- or for that matter the violence of a shipwreck in a work by Turner -- we study it with active and attentive consideration. Prompted by the artist's stylistic choices, we think about the world it envisions, we make associations, we explore and imagine."
What makes a contemplative game so rewarding for a player, if it doesn't contain the same challenges we all know so well? How do gamers react to new worlds where their goals are different?
Welsh says that games of this type attempt to offer players something new and diverse in their interactions with digital media.
"They call for our attention, not through HD gimmicks or hyper-stimulation, but through appealing, attractive art design. They challenge us to think about and explore virtual spaces, not to win a competition or collect items, but simply because their environments are compelling and wonderful, in the true meaning of the word."
"In a media landscape filled with apocalyptic zombies, aliens, and invading armies, all rendered in gritty green-gray 'realism,' there is a lot to be said for games that are just plain beautiful, that invite exploration, even deeper thought. That there is an audience that wants that kind of experience from a game, shows how far gaming has come as a medium and that there is still room to grow."
Many types of games offer reward for action, which gamers enjoy on a personal and competitive level. But do gamers get their fix for being rewarded in peaceful games that don't urge competition?
"It's not just the (gaming) environment that has an impact on a player's psyche. It's the mechanics," says Kellee Santiago, president and co-founder of thatgamecompany.
"What you are rewarding the players for in the game? Are they being rewarded intrinsically by having a deeper understand of a puzzle, a touching moment, a connection with a team? Or are they being rewarded extrinsically with flashing lights, number counters and coins?"
"These are the questions we should be asking when we think about the impact of games on our players psyches."
Games have long contained themes that encourage all sorts of reactions that thread directly into our own human experiences: adventure, risk, problem solving. Some have even made us question our own ethics.
However, a title like "Journey" pushes the landscape for gamers into new territory: Exploring an allegory of our own life. Games are inviting us to contemplate instead of distract, asking us to question who we are and what we are searching for, and ultimately, what our lives mean.
Perhaps that's the reward.
© 2022 Cable News Network, Inc. A Time Warner Company. All Rights Reserved.
CNN Sans ™ & © 2016 Cable News Network.