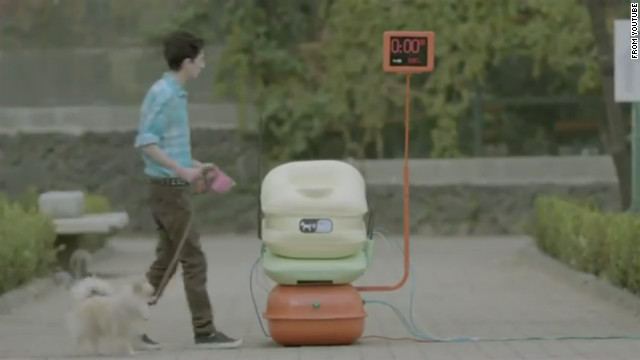 (CNN) --- OK, I know this sounds ridiculous. But hear me out. An Internet company in Mexico City recently tested the idea of giving responsible pet owners a treat for picking up after their dogs in public parks.
People put their dogs' droppings in a special container which measured the weight of the poop. The container, which doubled as a router, then emitted a set number of minutes of free Wi-Fi for every pound of feces it collected.
Yeah, that's kind of gross. And no, there apparently was nothing stopping Wi-Fi cheaters from putting rocks or other heavy objects in the bins instead of dog poop. But it's yet another example of game mechanics getting tacked on top of the real world we live in -- trying to influence our behavior, for better or worse, with rewards. The same kind we give to our pets.
Human trick: Pick up after your dog.
Read More
Treat: Free Wi-Fi and cleaner parks.
And, of course, they called it "Poo Wi-Fi."
Check out the video below. It's hilarious:
We weren't sure this was real at first, so I reached out to DDB, the advertising agency behind that video, to be sure. Fabiana Antacli, a spokeswoman for that agency, told me by e-mail that Poo Wi-Fi is, in fact, real, and that it was tried but ultimately discontinued in 10 Mexico City parks.
"It was a very special and local activation, like a pilot program for the brand," she wrote. "Like every action, its reach was limited for a short period of time." Terra, an Internet company, sponsored the project, she said.
© 2022 Cable News Network, Inc. A Time Warner Company. All Rights Reserved.
CNN Sans ™ & © 2016 Cable News Network.