Green power for all 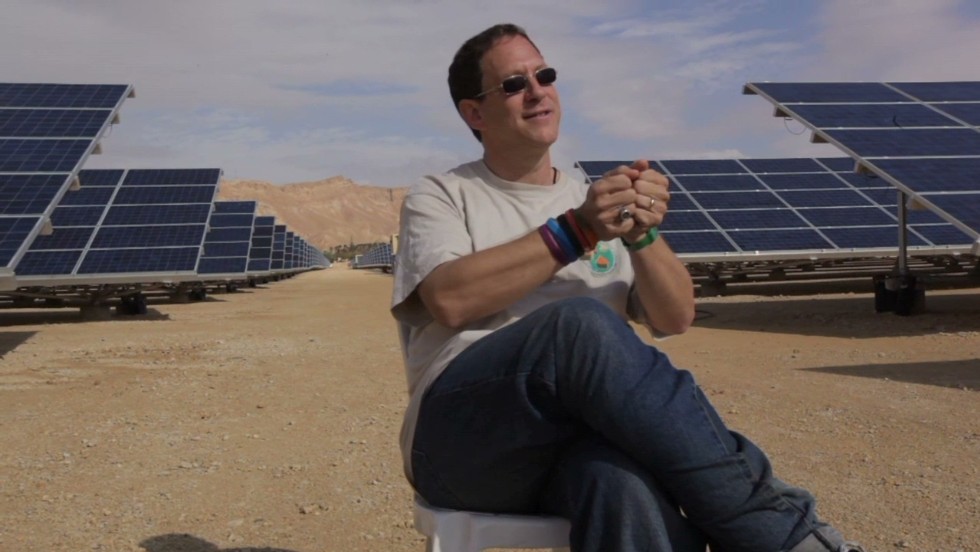 By Yosef Abramowitz, Special to CNN

The world, especially the developing world, has an acute need for food, water and energy. Israel happens to have terrific innovators in agriculture and in water technology, which, if exported, could provide food and water security to the over billion people who are vulnerable.
I’m a solar energy guy. Actually, I’m a trouble-maker, former anti-apartheid and human rights activist who stumbled into the solar world the second my family and I arrived to a remote desert kibbutz to begin a two-year escape-from-suburbia sabbatical.
Sometimes you get lucky, which is what I consider myself for having met at Kibbutz Ketura Ed Hofland and from New Jersey, David Rosenblatt. Together we formed the Arava Power Company and fought the good fight and eventually won the battle to bring commercial-scale solar power to the Jewish state. We also pioneered in Israel, thankfully with success, the concept of Impact Investing—doing good while doing well.
There are 1.6 billion people on the planet who do not have any electric power, despite the fact that the sun shines on them all. We learned some valuable lessons along the way in Israel that, with some luck and hard work, could be brought to Africa and elsewhere.
Read More
The UN Secretary General has launched a new initiative called “Sustainable Energy for All,” to provide green power to everyone by 2030. While we support this idea, I believe that we can supply green power to everyone by 2020. The 2030 goal is ambitious with a
world-view focused on raising non-profit, non-governmental funds, which are limited. I think the 2020 goal is ambitious and do-able, since we have developed a way to mobilize nearly unlimited for-profit funds to accomplish a similar goal but faster.
While solar energy is also a business I see it as a human rights campaign. The UN Declaration of Human Rights guarantees lots of things that poor people don’t have: education, health care, and jobs. None of this is really possible in a world without electricity. In the best of scenarios, however, when a poor country begins to provide power to its people, they are hooking up polluting and dirty diesel generators. So some of the poorest people are the planet, as they try to work their way out of poverty, end up becoming part of the climate change problem rather than part of the solution.
I want us all to be part of the solution to climate change and global warming, while also accelerating developing of poor countries. So we started a second company, Energiya Global Capital, to do just that.
While we can’t do it alone, we do want to supply green power to 50 million people by 2020, which is about 10,000 megawatts—about the size of Israel’s energy market. And to give investors the opportunity to invest according to their values while creating value in the developing world.
Time is against us.
For the planet to be in balance, we need carbon dioxide levels to be at 350 parts per million. Today, we are at 392 parts, and accelerating quickly. According to some estimates, by 2017 the planet must level off any growth in greenhouse gas emissions in order for radical climate change to not be irreversible.
Since 9 percent of the planet’s electricity is produced from burning diesel oil, we can do something historic by zeroing it out. Not only taking out the carbon footprint of that energy, but also cutting the cost of power in those markets. The price of solar panels has dropped so drastically in the nearly seven years that we have been working to bring solar power to Israel that our costs are sometimes about half the cost of diesel. And solar power has none of the volatility, pollution or money going to autocratic regimes that produce most of the world’s oil.
I think what we have learned in our struggle to bring solar power to Israel can now be applied worldwide. And not to do so would be selfish. Just like with agriculture and water, Israel, through our efforts, has something to contribute in the realm of green power for the people. When President Obama was in Jerusalem last month, he singled out Israeli innovation in the field of solar energy, with its potential to help the world.
This is our journey. We have succeeded in Israel to begin our solar revolution. We cannot afford to fail to spark a solar revolution in Africa and elsewhere.
© 2020 Cable News Network, Inc. A Time Warner Company. All Rights Reserved.
CNN Sans ™ & © 2016 Cable News Network.