Drones: The future of disaster response 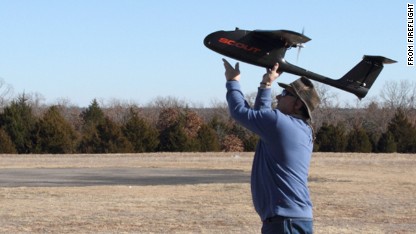 Fireflight's Scout is a light, portable unmanned aerial vehicle that its maker says is easy to launch and recover.

First responders to Monday's massive tornado in Moore, Oklahoma, were greeted with a blighted expanse of destroyed homes, blocked roads, downed power lines and a limited window of time to unearth survivors before the sun set.
Navigating the area on foot or by car was a challenge because of the debris. News and law-enforcement helicopters filled the air above, but while they gathered useful information for rescue crews, the noise they created was drowning out cries for help from trapped survivors.
The entire area was declared a no-fly zone.
But one airborne technology will soon make responding to these kinds disasters easier: unmanned automated vehicles (UAVs), more commonly called drones. These portable, affordable aircraft can launch quickly in dangerous situations, locate survivors and send data about their whereabouts to responders on the ground.
Read More
There is a lot of excitement about drones in the public-safety world, and they are very close to being used in the field after natural disasters. However, they still face lengthy regulatory hurdles, privacy concerns, and a public image problem inherited from their armed, military cousins.
Holder: Drone strikes have killed four Americans
Still, the UAV industry and emergency responders are preparing for the day when they can launch drones after tornadoes, earthquakes, hurricanes, floods and any other disaster.
"The public just isn't really in the habit of depending on them," said James Stuckey, CEO of Fireflight, an Oklahoma-based drone company. "When they start, they won't be able to do without them."
Drone power
The benefits of drones in an emergency are reach, speed, safety and cost. When there is no power, a UAV can fly through the dark and live-stream night-vision footage to people on the ground, its paths automatically programmed so it doesn't miss a spot. A mounted infrared camera can pick up on heat signatures of bodies, pinpointing the locations of survivors so rescuers know where to go.
Unlike manned helicopters, drones create very little sound and can even be outfitted with advanced listening devices to pick up hard-to-hear audio. They can go into dangerous situations that would pose a risk to pilots or responders on foot. While helicopter propellers can stir up debris and dust, UAVs weigh as little as three pounds and don't disturb what's on the ground, even when they're hovering just 10 feet above it. 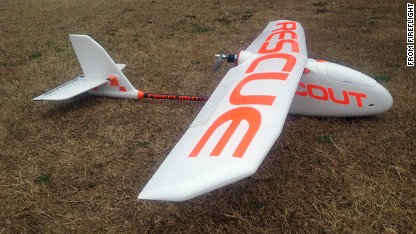