Robots: The future of elder care? 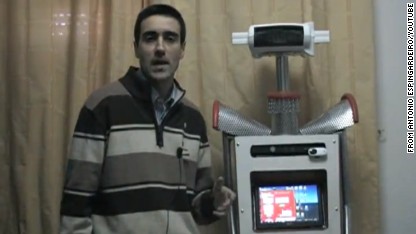 Would you let a robot take over as a live-in nurse for your aging parent or grandparent?
In 2050, the elderly will account for 16 percent of the global population. That's 1.5 billion people over the age of 65, according to the Population Reference Bureau. Caring for those seniors -- physically, emotionally and mentally -- will be an enormous undertaking, and experts say there will be a shortage of professionals trained and willing to take on the job.
"We have to find more resources and have to get new ways of delivering those resources and delivering the quality of care," says Antonio Espingardeiro, an expert in robotics and automation at the University of Salford in Manchester, England, and a member of the IEEE Robotics and Automation Society.
Enter the elder-care robot.
Read More
Robots have the potential to meet many of the needs of an aging population, according to Espingardeiro. A software engineer, Espingardeiro is finishing his PhD on new types of human and robotic interaction. He has developed a model of elder-care robot, P37 S65, which can monitor senior patients and communicate with doctors while providing basic care and companionship.
Espingardeiro sees great potential for robots as caregivers. They can use sensors and cameras to supervise an elderly person, making sure they take their medication at the right time or that they don't fall. Smart-home technology is addressing some of these issues, using sensors to track patterns and automatically detect when something is amiss. For example, in a fully automated house, a stove left on for too long or a person deviating from their normal daily patterns could trigger an alert for caregivers.
Bur robots could take such automated care a step further. They could help people suffering from dementia, reminding them about daily tasks and retaining important information -- phone numbers, or types of medication -- that the senior might forget. With a few conversational skills, robots might also keep an aging person's mind sharp by engaging them in chit-chat and challenging them with questions or games, while even tracking their progress or loss of memory over time.
Robots with computer screens could also act as telepresence machines, bridging the gap between health-care professionals and the elderly. Traveling to the hospital can be a stressful experience, and frequent nurse visits are cost and time prohibitive. Instead, a doctor could check in on their patient more frequently via the robot's screen, even controlling the machine remotely for simple tasks like taking vitals. Family members could communicate remotely with a parent or grandparent via a telepresence robot -- Skype with movement and a body.
With advanced artificial intelligence and humanoid designs, these robots could even act as companions, potentially alleviating loneliness.
Japan is already experimenting with elder-care robots in nursing homes. Barely a foot high, the Palro is people shaped, with two arms, two legs and a head. It can have simple conversations and play games. A more adorable approach is the Palro therapy bot, which has been around for more than a decade. The robots look like small stuffed harp seals and respond to petting with body and eye movements. They are an alternative to therapy animals to calm and de-stress the elderly.
The Japanese government is looking seriously to robots as a solution for its growing elder population and has set aside $24 million of its 2013 budget for research and development of senior-care robots.
Even with these early forays into the field, Espingardeiro predicts it could be 25 years before full robotic care is possible. Researchers still need to improve the reliability of the robots and work on semantics and pattern recognition. Assistive-care robotics is benefiting from research in other industries, like space and defense, where there are larger budgets. Advancements in these areas, such as research done for the Mars Curiosity rover, will trickle down and benefit all robotics fields.
The wait for a fully-functional robotic nurse is not just because the hardware, software and artificial intelligence need work. Scientists also need to figure out the best methods for safely using them.
"Delivering machines is not just a question of buying robots, even if in the future they become cheap. There are many ethical issues," said Espingardeiro.
Currently Espingardeiro and others are researching the advantages and disadvantages of robots over human caretakers. They are also looking into the potentially troubling implications of a patient developing an emotional connection to a robot.
"This is a very vulnerable group, very frail," said Espingardeiro. "What happens if they get attached to these machines?"
© 2022 Cable News Network, Inc. A Time Warner Company. All Rights Reserved.
CNN Sans ™ & © 2016 Cable News Network.