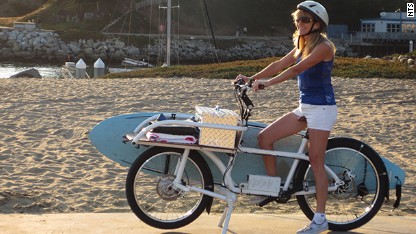 There's only so much you can fit inside one of those cute woven baskets found on the common bicycle: a small bag of groceries, fresh-cut flowers and a baguette, maybe a puppy.
But the new 2X4 cargo bike from NTS Works is built to haul up to 100 pounds of goods and, with the help of its electrical-assist engine, go as fast as 20 miles an hour.
The bike, a cross between a bicycle, motorcycle and beast of burden, is the brainchild of California bike designer Neal Saiki. He hopes the $4,800 2X4 will catch on with regular people running errands, as well as companies that deliver packages, fruit boxes, pizzas and other goods in urban areas.
Enterprising riders around the world have used the humble bicycle to haul freight for more than 100 years. They creatively balance large loads or small families on two wheels, often modifying a bike's design to accommodate specific hefty cargo.
Read More
These "cargo" or "freight" bikes are still in use in many places where cars and gas remain too expensive, or where the roads are so small or congested that a bike is a more efficient way to get around. They're especially popular in Europe, where some manufacturers have added electrical engines to boost the bikes' hauling power and assist riders up hills.
Though these bikes get the job done and are popular with postal services and small businesses that rely on local deliveries, Saiki sees room for improvement.
"The cargo bikes on the market are just horrible to ride, with terrible handling," said Saiki. "I had to come up with a new way to steer a cargo bicycle." 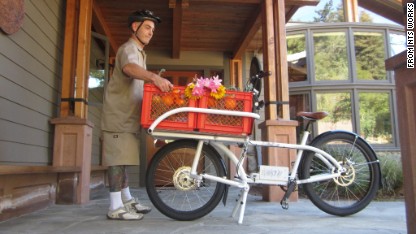 NTS Works claim the bike's belt drive doesn’t need lubrication, reducing maintenance.
Saiki, a former aeronautical engineer, has been working with bikes for more than 20 years. In 2005, he started the electric motorcycle company Zero Motorcycles. For his newest startup, NTS Works, he decided to focus on improving traditional bicycle technology.
He spent the past three years designing the 67-pound aluminum electric cargo bike so that it rides like a regular bicycle. Using computer simulations, his team determined early on that the best place to put cargo is above the front wheel. Unfortunately, that makes handling tricky, so they designed the 2X4 so the rider steers the front wheel through the axle.
Though it's electric, the 2X4 bike is not for the lazy. There is no throttle. A sensor detects when you are pedaling, and only then will it kick in with one of three power levels, going up to 20 miles an hour -- an impressive speed for cargo bikes, but not unheard of for traditional road bikes.
"It requires you to put some power into it and it's the perfect workout, but you're not exhausted," said Saiki. "I figure if you really don't want to pedal, you should just buy an electric motorcycle."
The biggest advantage of an electric-assist bicycle over a car or motorcycle is cost, says Saiki. At $4,800, the  2X4 is not cheap, but for $30 in electricity you can ride the bike up to 10,000 miles. A full charge will take the bike about 30 miles, so Saiki recommends plugging it in nightly. The battery is unique in that mechanics can go in and repair and refurbish the individual cells instead of having to replace it entirely.
There are other costs and labor savings for companies. A car, even a motorcycle or scooter, requires insurance, registration and drivers with licenses. Most people already know how to ride a bike, and the liability for a bicycle is much lower than fully motorized transportation.
"When you add up all of those costs compared to a gas vehicle, there definitely is a significant cost savings," said Saiki.
Saiki hopes to put 25% of his company's profits into bikes for charitable organizations and disaster-relief organizations, distributing cargo bikes to developing countries where they can have an impact on people's day-to-day lives.
NTS Works will launch a Kickstarter campaign for the bike in the coming weeks and Saiki hopes to begin selling it in the U.S. and Europe early next year.
© 2020 Cable News Network, Inc. A Time Warner Company. All Rights Reserved.
CNN Sans ™ & © 2016 Cable News Network.