These executives are asking their staff to work less for the same money. Will it pay off?
CEOs are preparing for a recession, and they don't think it will be short
South Korean internet firm to acquire Poshmark for $1.2 billion
Something isn't loading properly. Please check back later.

Kieron Monks, for CNN
Published 10:50 AM EDT, Wed May 14, 2014
Link Copied!
Ad Feedback
Hacking the orchestra —
Tesla coil music: ArcAttack's performances use two custom built "singing" Tesla coils, which have been hacked to produce tones when creator Joe DiPrima modulates the current.
courtesy arcattack
Hacking the orchestra —
The Earth Harp is the largest stringed instrument on the planet: the strings connect from a central body onto the architecture of a hall, or the geography of a landscape, to turn the world around it into an instrument. Played with a pair of resin covered gloves, it sounds a bit like a cello, apparently.
Courtesy William Close
Hacking the orchestra —
The ultimate instrument? How about a bowl of ice cream. Designers Carla Diana and Emilie Baltz embedded sensors in 3-D printed cones so that a signal was sent out -- and turned into sound -- when a tongue touched the creamy goodness.
Courtesy Emilie Baltz
Hacking the orchestra —
Making music with shadow puppets? The Cave of Sounds invites people who have never met to make music together, by getting hands on with 8 original instruments which use movement, shadow and light to create sound.
Tim Murray-Browne/Music Hackspace
Hacking the orchestra —
Singer-songwriter Imogen Heap has performed ethereal versions of her tracks, playing an instrument of her own creation -- housed in a glove. "I wanted to be able to play the computer as expressively as I can play the piano," she says.
Fiona Garden/Mi.Mu gloves
Hacking the orchestra —
Crowdfunded "all-in-one musical invention kit" Ototo allows you to turn anything into an instrument, although the inventors seem to think you'll mostly be plugging in vegetables.
courtesy dentaku london
Hacking the orchestra —
Vinyl Terror and Horror -- real names Camilla Sørensen and Greta Christensen -- have hacked the turntables... to pieces. Their scarred, smashed and restitched vinyl create all types of noise, occasionally interrupted by the vinyl's intended soundtrack.
courtesy vinyl terror and horror
Hacking the orchestra —
Giving a new meaning to playing a games console, Thom Uliasz and Justin Emerson have been hacking electronic devices
together as Burnkit2600 since 1997. They specialize in reprogramming consoles and old games cartridges to make previously unheard sounds.
Courtesy Burnkit2600
Hacking the orchestra —
American alternative rock troupe They Might Be Giants are fans of the hacked household appliance: they employed a circuit-bent Speak & Spell toy to rejig one of their hits.
Courtesy Texas Instruments
Hacking the orchestra —
The AlphaSphere was envisioned as a new way for musicians to interact with music software -- by playing with a ball. Each pad creates a different noise: what noise is up to you.
Courtesy nu desine
Hacking the orchestra —
The Samchillian Tip Tip Tip Cheeepeeeee is a computer keyboard where each key denotes a change of pitch (rather than a fixed pitch, as it would on a piano keyboard.) A user selects a scale and a key -- then plays.
Courtesy Leon Gruenbaum
Hacking the orchestra —
The Artiphon Instrument 1 was invented by Mike Butera in Nashville. The multi-instrument is powered by an iPhone and can be played as a guitar, violin, bass or keyboard.
Courtesy Artiphon
Hacking the orchestra —
In 2011, the MO was the winner of Georgia Tech's Margaret Guthman Musical Instrument Competition. The MO allows people to turn everyday objects into their own digital musical instruments, which can be controlled through different types of motion. The MO was featured at the MoMA gallery in New York.
IRCAM (CNRS-UPMC)/Nodesign.net/ Da Fact /Atelier des Feuillantines/Grame/Voxler
Hacking the orchestra —
The You Rock Guitar is an affordable digital MIDI guitar. It was designed for home or studio recording and connects with a broad range of computers and mobile devices. Sort of like a Guitar Hero controller, but for grown-ups.
Courtesy YouRock digital

There are over 1,000 workshops all over the world that 'hack' instruments

Edible instruments have been created, using ice-cream activated by the player's tongue

I keep my hands hovering in the space between an elevated lamp and a square white box that resembles a washing machine. At a signal, I make patterns with my hands, creating shadows that stretch out on the bright surface below, generating a cacophony of barking, as if a pack of dogs have been released into the East London basement.

This is a meeting of the city’s Music Hackspace, an offshoot of the London Hackspace, among the largest of over 1,000 such citizen workshops that populate the world from Brazil to Baghdad.

Around a dozen keen members – and 150 part-time - form the basis of this music chapter; designing, building and re-purposing instruments to suit ambitious creative projects.

The ‘washing machine’ is one of eight home-made instruments the members have created that make up the ‘Cave of Sounds’, an installation inspired by prehistoric musical collaboration, which has exhibited in some of London’s leading cultural institutions including the Victoria & Albert Museum and Barbican centre.

Three of the instruments respond to physical movement, and another is activated by light. One produces sound through an accelerometer and gyroscope, and there is a sensor-filled hat operated by taps from a metallic glove.

Trained percussionist and hackspace member Dominic Averso believes a new style of instrument is emerging from maker culture. “The technology lowers the bar to participation, so it’s easier to create with it. But the music may be more ephemeral than lasting – there’s a parallel to early jazz when it was very free and experimental.”

The technology lowers the bar to participation, so it’s easier to create with it.

But Averso believes that there may be a lasting impact from instruments that interact with the listener. “Future generations might think it’s wacky to listen to the same song over and over again.”

The collective have already made waves through Seaboard, a radically re-imagined keyboard, launched by London start-up ROLI with the work of several members. The instrument uses tactile sensations to create a more nuanced experience, allowing the user greater control of the volume, pitch, and timbre emanating from its rubber keys.

The Seaboard has heavyweight support from the likes of Hans Zimmer, who demonstrated its use, and is now a shareholder.

“Evolution can be more responsive versions of existing instruments”, says Jean-Baptiste Thibaut, ROLI innovation manager and hackspace organizer. “Digital music offers so much range and possibility but misses the familiarity of physical objects in your hand. Your body has so much expressive ability, so I think the future is combining the two.”

This mode for innovation has been popular. The semi-finalists in Georgia Tech’s prestigious musical instrument competition’ included Chet Udell’s augmented Trombone, complete with amplification and wireless sensors, and the eCorder that gives the woodwind staple a range of effects and data capture.

A contrasting approach has been to make computers behave like traditional instruments, as pioneered by UK band Hugs Bison.

You’re more physically involved, you can bend and distort notes, and affect the sound more.

The musicians play heavily customized iPads, using touch screen interfaces, wireless sensing and a range of apps such as virtual instrument platform ‘ThumbJam’ to give performances along with the sound.

“I play very differently when there is touch”, says band member Shaun Blezard, comparing with his background in electronic music production. “It feels like a real instrument rather than technology. You’re more physically involved, you can bend and distort notes, and affect the sound more.”

Blezard believes it’s a method accessible to any beginner “if they have a good ear”, and sees potential for large-scale, networked collaborations. Hobbyists have already shown the potential with a reworking of the “Dr. Who” theme, while the Göteborg Symphony Orchestra have delivered a symphony on iPhones.

Emerging instruments can be even more available and adaptable than our smartphones.

The ‘Ototo’ from London start-up Dentaku is a pocket-sized synthesizer that can turn any everyday object - from vegetables to furniture - into an instrument if the two are connected with simple cables. The user can then compose using the synthesizer’s inputs and the object’s own conductive properties (see video below. If reading on mobile, click here).

Ototo: Make Music from Anything - Kickstarter 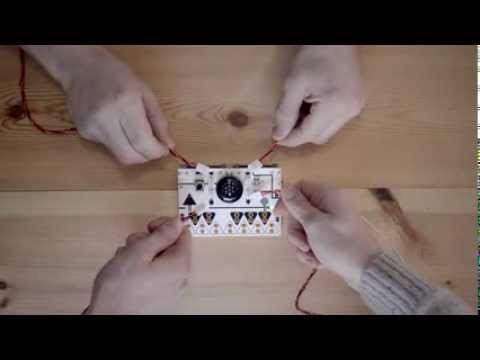 A similar system has been adapted to create wearable instruments, as with the percussion jackets worn by America’s Got Talent participant William Close, and even edible instruments, through ice-cream activated by the player’s tongue.

Analysts see a collective spirit as a common thread running through innovation in hacked instruments. “It’s partly about using technology to make people interact”, says Nick Sherrard, head of development, digital and communications at Sound and Music, the UK agency for new music. “Anyone can play but typically it needs to be with others.”

Future generations might think it’s wacky to listen to the same song over and over again.

Sherrard believes such home-made instruments could have a broad appeal beyond the maker niche and be widely taken up by children, although as an accompaniment rather than a replacement for traditional instruments. “Musicians that do one would do the other.”

The analyst is most excited about “music generated by interaction with living things”, and some epic projects have illustrated the potential of using the environment as an instrument. “Living Symphonies” is the result of two artists laboriously mapping a British forest over two years and creating a musical motif for each organism, a database which is then installed at the site so that the forest effectively plays - and interacts with - its own symphony.

In 2013, MIT composer Tod Machover used thousands of crowd-sourced sound elements from the city of Edinburgh, drawing on everything from elevator conversation to overhead planes, to create a soundscape for the city’s festival.

The richness of audio data available from the environment also offers spectacular performance possibilities, to give the audience immersive, multi-sensory experiences.

The classical virtuosos are not endangered yet, but regular concerts and instruments could begin to seem outdated before long.