How 'magic mushroom' chemical could free the mind of depression, addictions

Scientists are researching medical benefits of psilocybin, which is found in "magic mushrooms."

(CNN)Think of psychedelics and you'll likely think of bright colors, hallucinations, spirituality, and an overall "mystical" experience. For centuries these drugs have been used in social, religious and medicinal contexts by cultures across the globe. But today, the ability of these drugs to alter our brain function is being tapped into as a potential therapeutic for a range of mental health conditions from anxiety and depression to addiction and obsessive compulsive disorder (OCD).

"Only by losing the self, can you find the self," explains Dr Robin Carhart-Harris, from Imperial College London. These may not be the usual words of a scientist but there is biology behind them. "People try and run away from things and to forget, but with psychedelic drugs they're forced to confront and really look at themselves," he says.

You can liberate them from depressive symptoms by showing them it's possible to escape those thoughts.

The drugs Carhart-Harris is referring to are hallucinogens such as magic mushrooms -- specifically the active chemical inside them, psilocybin. "We're beginning to identify the biological basis of the reported mind expansion associated with psychedelic drugs," he says. Psilocybin is not addictive and is interesting to researchers for its ability to make users see the world differently. The team at Imperial College has begun to unravel why.
Carhart-Harris scanned the brains of 30 healthy volunteers after they had been injected with psilocybin and found the more primitive regions of the brain associated with emotional thinking became more active and the brain's "default mode network," associated with high-level thinking, self-consciousness and introspection, was disjointed and less active. 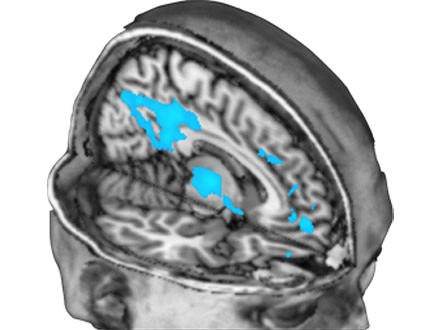 Decreased blood flow under the influence of psilocybin in regions of the brain that are known to integrate information and mediate conscious states.
Courtesy Carhart-Harris et al. (2012) PNAS

"We know that a number of mental illnesses, such as OCD and depression, are associated with excessive connectivity of the brain, and the default mode network becomes over-connected," says David Nutt, professor of neuropsychopharmacology, who leads the Imperial College team. Nutt was formerly drug adviser to the UK government but was fired in 2009. He "cannot be both a government adviser and a campaigner against government policy," wrote a member of the British Parliament, at the time.
Read More
Read: The people with someone else's face
The over-connectivity Nutt describes causes depressed people to become locked into rumination and concentrate excessively on negative thoughts about themselves. "By disrupting that network [with psilocybin] you can liberate them from those depressive symptoms by showing them it's possible to escape those thoughts," he says.
Depression is estimated to affect more than 350 million people around the world, according to the World Health Organization. The current pharmaceutical approach to treatment is with selective serotonin re-uptake inhibitors (SSRIs), such as Prozac, which increase levels of serotonin in the brain to improve moods. But SSRIs are not effective in everyone, take time to show an effect and are generally prescribed for long periods of time to maintain their effect.
Nutt thinks psilocybin could be a game-changer, used as part of a therapeutic package where the mind-altering and confronting nature of psychedelics are combined with therapy to treat people within just one or two doses of treatment. "We've never had drugs before with an instant effect. This could create a paradigm shift to help people into a different state of thinking that they can then stay in," he says.
But he stresses that psilocybin should be administered with professional support as part of medical therapy.
Psilocybin is illegal in many countries and in the United States it is considered a Schedule 1 drug. Schedule 1 drugs "have a high potential for abuse and serve no legitimate medical purpose in the United States," according to the Department of Justice.
The U.S. National Institute of Drug Abuse says that long-term negative effects such as flashbacks, a risk of psychiatric illness and impaired memory have been described in case reports. Some