Ukraine: Everything you need to know about how we got here

It began as a dispute over a trade agreement, but it mushroomed into the bloodiest conflict in Europe since the wars over the former Yugoslavia in the early 1990s.

After Russia annexed Crimea in 2014 following tensions with its neighbor, world leaders managed to install a shaky peace deal in 2015. But violence continues in the conflict zone in eastern Ukraine – 2016 saw an increase in casualties and 2017 has kicked off with a flareup of fighting.

So how did this dispute begin and how did it then erupt in to civil war? CNN examines the evolution of the Ukraine crisis.

Ukrainian is spoken by 70% of the country, but Russian is the mother tongue of many in the east.
CNN

November 21, 2013: After a year of insisting he would sign a landmark political and trade deal with the European Union, Ukrainian President Viktor Yanukovych suspends talks in the face of opposition from Russia, which has long opposed Ukraine forming closer ties with the EU. Tens of thousands of protesters hit the streets in the following days, highlighting the deep divide between the pro-European west and Yanukovych’s power base in the pro-Russian east of Ukraine.

February 20, 2014: Violence that has been simmering for weeks bubbles over when a gunfight erupts between protesters and police in Maidan (Independence) Square in central Kiev, leaving dozens of people dead. Protesters say government snipers opened fire on them; Yanukovych’s government blames opposition leaders for provoking the violence.

… and the Ukrainian President flees

Video Ad Feedback
Is this the gaudiest palace ever?
02:23 - Source: CNN

February 22, 2014: Yanukovych flees Kiev as his guards abandon the presidential compound. Thousands storm the grounds, marveling at the lavish estate he left behind. Former Prime Minister (and Yanukovych adversary) Yulia Tymoshenko – jailed in 2011 for “abuse of office” after a trial that was widely seen as politically motivated – is released from prison and addresses pro-Western protesters in Maidan Square.

March 1, 2014: Russia’s parliament signs off on President Vladimir Putin’s request to send military forces into Crimea, an autonomous region of southern Ukraine with strong Russian loyalties. Thousands of Russian-speaking troops wearing unmarked uniforms pour into the peninsula. Two weeks later, Russia completes its annexation of Crimea in a referendum that is slammed by Ukraine and most of the world as illegitimate.

… and soon Kiev starts cracking down in eastern Ukraine

April 15, 2014: Kiev’s government launches its first formal military action against the pro-Russian rebels who have seized government buildings in towns and cities across eastern Ukraine. Putin warns that Ukraine is on the “brink of civil war.” Less than a month later, separatists in the eastern regions of Donetsk and Luhansk declare independence after unrecognized referendums.

In the spring, a new President takes power in Kiev …

May 25, 2014: The “Chocolate King” Petro Poroshenko, a candy company magnate and one of the country’s richest men, declares victory in Ukraine’s presidential elections. Pro-Russian separatists are accused of preventing people from voting in the violence-wracked east of the country.

… and that contentious EU trade deal finally gets signed.

June 27, 2014: Poroshenko signs the EU Association Agreement – the same deal that former President Yanukovych backed out of in 2013 – and warns Russia that Ukraine’s determination to pursue its European dreams will not be denied.

A commercial airliner is blown out of the sky …

July 17, 2014: 298 people are killed when Malaysia Airlines Flight 17 is shot down by a surface-to-air missile above rebel-held territory in eastern Ukraine. Initially, gunmen prevent international monitors from reaching the crash site, exacerbating the grief of the families of the victims, and it takes days before rebels allow investigators to examine the bodies.

… and months later, a ceasefire follows

September 20, 2014: Ukraine and pro-Russian separatists agree to a complete ceasefire and buffer zone that require all sides to pull heavy weaponry back from the front lines of the conflict, two weeks after an initial truce was agreed to. Meanwhile, a convoy of Russian trucks streams into the border area without the Ukrainian government’s approval. Russia insists the trucks are filled with humanitarian aid, but Kiev is skeptical.

Come winter, the fight in the east becomes bitter …

November 12, 2014: A NATO commander says that Russian tanks, other weapons and troops are pouring across the border into Ukraine, in apparent violation of the September ceasefire – a claim that Moscow denies. And by the end of the year, the U.N. says more than 1.7 million children in the conflict-torn areas of eastern Ukraine are facing “extremely serious” situations exacerbated by unusually harsh winter conditions. 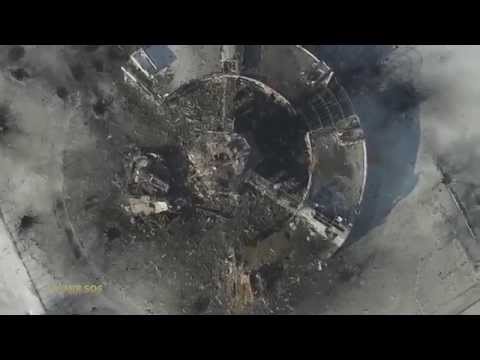 January 22, 2015: Donetsk International Airport, which was rebuilt ahead of the European soccer championships in 2012, falls to rebels after months of fighting with Ukrainian government forces. Days later, amid spiraling violence, President Poroshenko announces he will ask the International Criminal Court at The Hague to investigate alleged “crimes against humanity” in the conflict.

… and the West becomes divided

February 12, 2015: Germany’s Angela Merkel and France’s Francois Hollande hammer out a ceasefire agreement with Ukraine and Russia after the United States says it is considering supplying lethal aid to Ukraine. European leaders are opposed to arming Kiev’s government forces, and they fear it could further ignite a conflict that has now killed more than 5,000 people, including many civilians. Three days later, the ceasefire goes into effect, but violations quickly follow. Over the next few days, Ukraine says several of its service members were killed. Ukraine’s National Defense and Security Council reports 300 violations of the ceasefire by February 20.

… then the EU extends sanctions on Russia

June 22, 2015: European Union foreign ministers extend sanctions against Russia, imposed because of the country’s actions in Crimea and eastern Ukraine. The Kremlin calls the sanctions “unfounded and illegal.” The sanctions, and the events that preceded their imposition, reflect the tug of war between East and West over the future of Ukraine.

March 3, 2016: Ukraine’s prolonged stalemate is causing grief and isolation among millions living in the conflict zone, the United Nations warns. The fragile ceasefire is pierced daily by violations, while the number of conflict-related civilian casualties keeps climbing. Since the beginning of the conflict in April 2014, nearly 9,500 people have been killed in the violence and more than 22,100 injured, including Ukrainian armed forces, civilians and members of armed groups, the UN says.

… and civilian casualties highest for a year

August 5, 2016: The Office of the UN High Commissioner for Human Rights releases new figures showing that the conflict on the frontline has resulted in a spike in civilian casualties. The agency documented 69 civilian casualties in eastern Ukraine in June, including 12 dead and 57 injured – nearly double the figure for May and the highest toll since August 2015. July saw 73 civilian casualties, including eight dead and 65 injured.

February 1, 2017: Fighting in eastern Ukraine between pro-Russian rebels and Ukrainian armed forces escalates in the early days of Donald Trump’s presidency. US Ambassador to the UN Nikki Haley condemns Russia’s “aggressive actions” in her first speech at the UN Security Council. Her remarks are in stark contrast to previous rhetoric from Trump, who as a candidate hinted he might recognize Russia’s annexation of Crimea.