The #TwizzlerChallenge: This year’s Ice Bucket

The #TwizzlerChallenge is inspired by "Lady and the Tramp"

Admit it, you’ve been secretly itching for a new cause since last year’s Ice Bucket Challenge for ALS left your teeth chattering and raised $115 million.

This one’s goofier and tastier, and won’t leave you needing a change of clothes. It’s the #TwizzlerChallenge.

So what’s this challenge all about? Think of the spaghetti scene from “Lady and the Tramp,” except substitute a Twizzler for the noodle.

You’re supposed to do a video, of course, and challenge others to do the same for a good cause.

The ball got rolling almost two weeks ago on Comedy Central’s “Night of Too Many Stars,” a fundraiser for autism programs.

A tweet from sportscaster Fred Katz challenged the “Today” show’s Willie Geist and Uzo Aduba, who plays Suzanne “Crazy Eyes” Warren on “Orange Is the New Black,” to share a “Lady and the Tramp” licorice.

It took off from there. Next thing you knew, Geist was repeating the stunt with Meredith Vieira and the #TwizzlerChallenge was on. 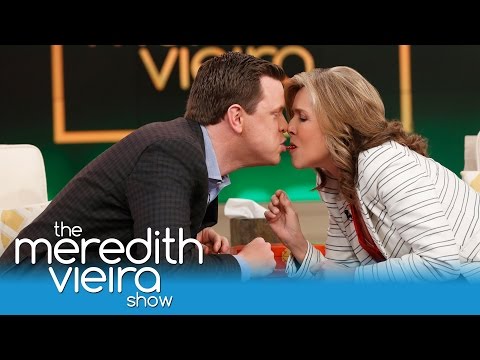 Geist and Vieira challenged Matt Lauer and Kathy Lee Gifford. They were good sports about it, but you may want to close your eyes here. This isn’t for the faint of heart.

The challenge is starting to invade social media. Just search the hashtag #TwizzlerChallenge.

Is the #TwizzlerChallenge about to take over? See who's done it so far: http://t.co/N0wqb6ZSrl pic.twitter.com/LL32RpotPl

It sounds like a sweet deal for the folks at Twizzlers. Their candy is on the lips of America.

And to their credit, a couple of Twizzlers executives took the challenge and donated $10,000.

The money goes to New York Collaborates for Autism. The group funds and creates schools, programs and services for people with autism nationwide.

Since 2006, “Night of Too Many Stars” has raised over $22 million. If this challenge is even half as successful as the Ice Bucket Challenge, that number will triple.

See you at the candy counter.